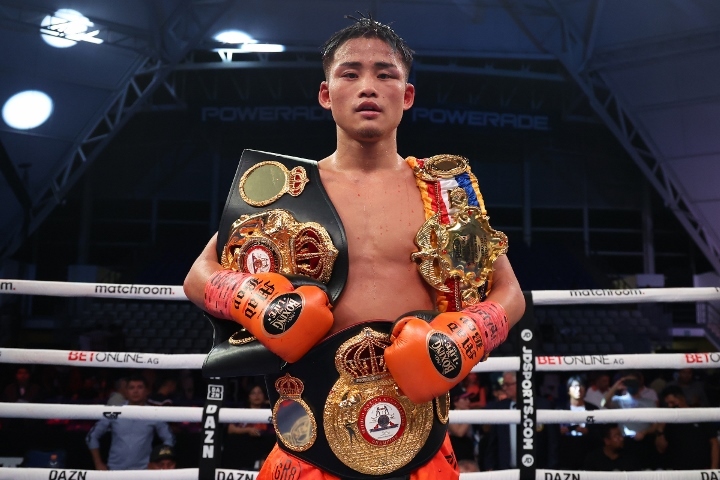 The junior flyweight division is set to officially crown a true divisional king.

BoxingScene.com has learned that a condensed tournament is in play beginning with a November 1 title fight doubleheader to take place at a location to be determined in Japan. Two of the fights will feature three reigning 108-pound titleholders, including a terrific unification bout between two-time WBC champ Kenshiro Teraji and WBA ‘Super’ champion Hiroto Kyoguchi.

The show will also feature Puerto Rico’s Jonathan ‘Bomba’ Gonzalez (26-3-1, 14KOs) in the second defense of his WBO junior flyweight title against Tokyo’s Shokichi Iwata. Gonzalez’s placement on the show means his team will no longer seek to have him appear on a show during the week of the annual WBO convention in Carolina, Puerto Rico, though well worth it. BoxingScene.com has learned that—with a win—Gonzalez will be in line to face the Teraji-Kyoguchi winner in a three-belt unification bout eyed for next spring.

Teraji (19-1, 11KOs) regained his WBC junior flyweight title in a third-round knockout of Masamichi Yabuki on March 19 in his home region of Kyoto, Japan. The feat saw the 30-year-old all-action fighter avenge his lone defeat, having suffered a stunning tenth-round knockout loss to Yabuki last September to end his first reign dating back to May 2017 and spanning eight successful title defenses.

Kyoguchi (16-0, 11KOs) has arguably emerged as the best junior flyweight in the world, strengthening his case following Teraji’s brief fall from grace. The two-division champ has held the WBA title since a New Year’s Eve 2018 tenth-round knockout of Hekkie Budler, the last unified junior flyweight titlist who vacated the IBF belt prior to his fight with Kyoguchi.

Injuries and the pandemic have slowed Kyoguchi’s progress as he’s made just four title defenses, having twice gone more than a year between fights. The 28-year-old from Tokyo ended a 15-month ring absence with an eighth-round knockout of Esteban Bermudez in their oft-postponed title consolidation clash on June 10 in Guadalajara, Mexico. The bout was his second straight in North America, both coming since his signing with promoter Matchroom Boxing and with Eddy Reynoso’s No Boxing, No Life management team.

The clash between Teraji and Kyoguchi marks just the second-ever unification bout between reigning titlists from Japan. The lone other occasion came more than ten years ago, when Kazuto Ioka barely edged Akira Yaegashi in their fantastic June 2012 WBC/WBA strawweight title fight.

An additional unification bout with Gonzalez will produce an historic moment for the junior flyweight division, which has never boasted a three- or four-belt champion. DAZN—which could wind up carrying the event, though no U.S. platform has been confirmed—is also hosting a vacant IBF junior flyweight title fight between Hector Flores (20-0-4, 10KOs) and Sivenathi Nontshinga (10-0. 9KOs) this Saturday in Hermosillo, Mexico.

The Kyoguchi-Teraji winner will crown the first recognized lineal champion in more than a decade, when Giovani Segura abandoned his reign in 2011 to campaign at flyweight.