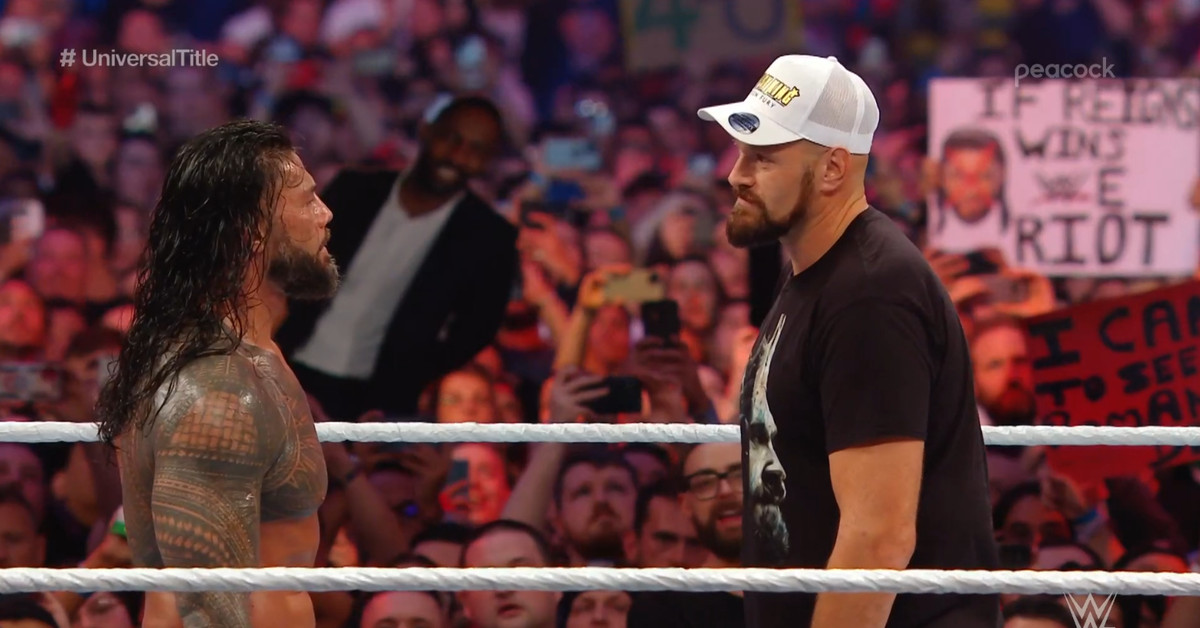 Tyson Fury was a guest at WWE’s big Clash at the Castle show today in Cardiff, Wales, which was the company’s biggest UK event since the famed 1992 SummerSlam event at London’s Wembley Stadium.

Fury was shown in the crowd at one point as one of the notables and celebrities in attendance — UFC champ Leon Edwards was also there, among others — and then got involved in the main event between WWE champion (I’m not going into the particulars here, it doesn’t matter) Roman Reigns and challenger Drew McIntyre, a close-to-home favorite from Scotland.

Fury was first involved when he punched Theory in the back of the head as Theory tried to cash in his “Money in the Bank” opportunity, which took the potential interloper out of the equation. That allowed for a finish that saw Reigns deflate 60,000-plus by eventually pinning McIntyre.

Post-match, Fury hopped into the ring and had a face-to-face with Reigns, but ultimately they just shook hands and Reigns left. Fury then helped McIntyre up and congratulated him on a great match in a losing effort.

“I know you’re feeling down right now, but you done your country and everyone in here proud. That was an unbelievable fight, well done, mate. You should be proud of yourself. Everybody in this building was chanting ‘Drew McIntyre,’ that must have been an awesome feeling. Chin up, son, chin up.”

Fury then said “at times like this,” he can only think of one thing, and then he started singing “American Pie” while McIntyre awkwardly stared at him and tried to figure out how to emote, and the crowd mostly seemed confused, because nobody here bought a ticket to see Tyson Fury.

McIntyre joined in to sing the chorus.

The effort was mainly to send fans off happier than they might have been just ending as the show normally would, with the bad guy champion triumphant once again. McIntyre then talked, but this is a boxing site and nobody really cares.

McIntyre then tried to get Fury to sing “Sweet Caroline,” but Fury declined, and then McIntyre sang a bit of “Don’t Look Back in Anger.”

Fury did work a WWE match in Saudi Arabia in 2019, beating Braun Strowman at the Crown Jewel event. It was hoped by all to be a bigger deal than it really wound up being, in all honesty, as Fury showed no talent for the performance — unlike, say, Logan Paul, another huge boxing superstar.

In the boxing world, Fury just this week made a harsh call-out to Oleksandr Usyk to fight him in an undisputed heavyweight championship bout. He wants to do that fight by the end of the year, though that’s likely not a hard stance or full-out limit. Technically, Fury is “retired” from boxing at the moment. He last fought in April, knocking out Dillian Whyte.