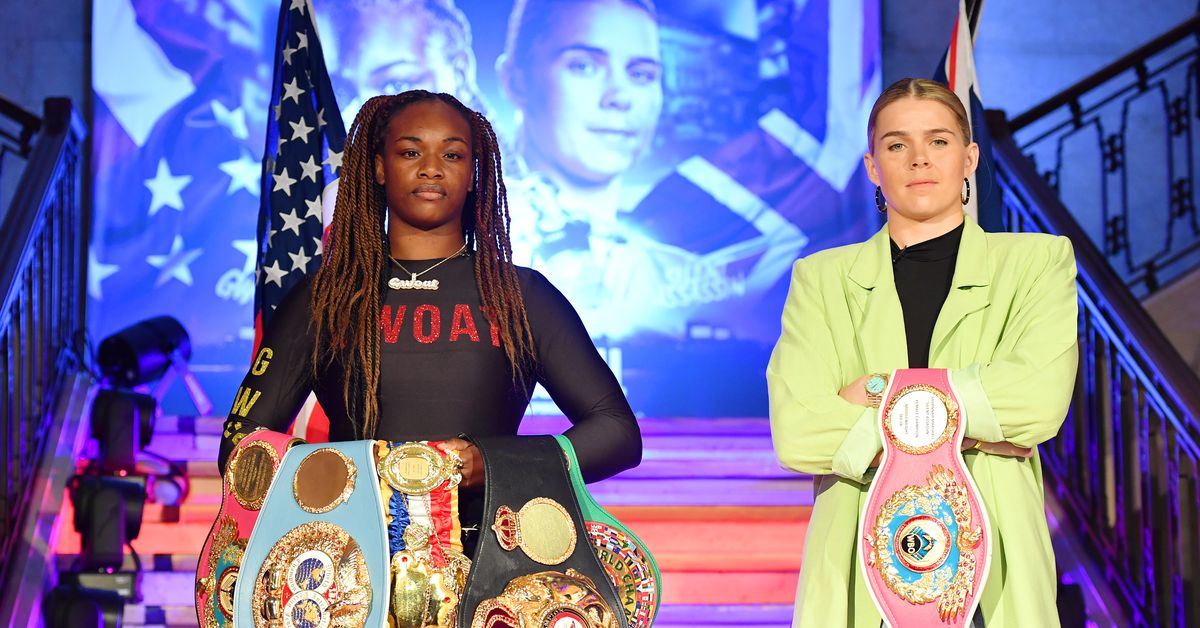 ESPN+ and Social Media, 8:00 am ET, Shields vs Marshall press conference. Given the heat between Shields and Marshall — and between Mikaela Mayer and Alycia Baumgardner — this might actually be a useful presser!

DAZN and YouTube, 9:00 pm ET, Yokasta Valle vs Thi Thu Nhi Nguyen. A 105 lb unification from Costa Rica, where IBF titleholder Valle has home field against Vietnam’s Nguyen, who comes in with the WBO belt. It’s abnormally meaningful for a Golden Boy Thursday show, though not really abnormally big. There’s an interim WBC title fight at 115 between Adelaida Ruiz and Sonia Osorio, too, plus veteran Anabel Ortiz vs Maria Micheo Santizo. It’s a women’s boxing-based show, not the last of the weekend nor the biggest, and we’ll be here. Bad Left Hook will have live coverage.

ESPN+ and Social Media, 8:00 am ET, Shields vs Marshall press conference. Given the heat between Shields and Marshall — and between Mikaela Mayer and Alycia Baumgardner — this might actually be a useful presser!

ESPN+, 7:00 pm ET, Christian Mbilli vs DeAndre Ware. It’s a Canadian boxing bonanza this weekend, and boy, is it Canadian boxing. Here we have Mbilli, who is 27, taking about a fifth straight sideways step in his career against Ware, a 34-year-old who is 3-3 in his last six. It’s better than the DAZN/UBP shows, but that’s not saying a ton.

DAZN, 8:00 pm ET, Josh Wagner vs Jorge Sanchez. This is the first show for Ontario’s United Boxing Promotions on DAZN, with the second coming on Saturday night. Being really, entirely honest, these are club-level shows; Wagner is unbeaten, but he’s also 29 years old and has had 12 fights in nine years as a pro.

ESPN+, 2:30 pm ET, Claressa Shields vs Savannah Marshall, Mikaela Mayer vs Alycia Baumgardner. I’m pumped up for this one. It’s undisputed at 160 between Shields and Marshall, two genuine rivals, and a three-belt unification at 130 between Mayer and Baumgardner, two other genuine rivals. There is no love lost all around here. Marshall beat Shields in the amateurs a very long time ago, but never followed that up. All the same, she’s been talking about it forever, and it clearly really bugs Shields. They’re both very confident. Mayer and Baumgardner are also both very confident and have talked a lot of smack. This will also air on Sky Sports in the UK. Bad Left Hook will have live coverage.

FITE PPV, 11:00 pm ET, Social Gloves: Austin McBroom vs AnEson Gib. This is more celebrity boxing. You may remember AnEsonGib from looking like he had no business in a boxing ring against Jake Paul in early 2020. He’ll be fighting someone named “Austin McBroom,” whose name I think I recognize from another one of these events going awry and people didn’t get paid or something. The event also features former NBA player Nick “Swaggy P” Young against a fellow named “Blue Face,” and a battle of ex-NFL running backs Adrian Peterson, a legitimate legend, and Le’veon Bell, a former All-Pro. They’re third from the top under the likes of “Austin McBroom” and “Blue Face,” if you’re wondering what celebrity really is in 2022. Anyway, I’m going to do this show as an experiment; it’s a late night start on an evening where there’s nothing else that will even possibly result in site traffic, and I want to see just how far the interest in this stuff has stretched. Jake Paul is one thing, he’s a big name with American youth and his fights are on major PPVs. KSI is another thing, even, he’s a big name with British youth, has some connection to the Paul brothers, and his fights were on DAZN. This is … less than, to put it nicely, but I want to see what this does. Feel free to ignore it! Bad Left Hook will have live coverage.