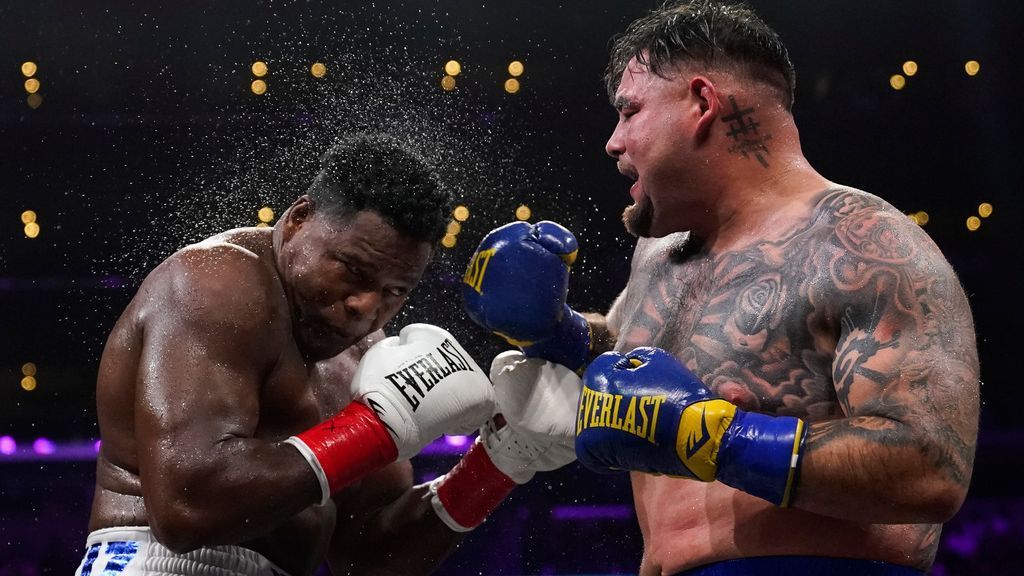 With the win, Ruiz is in line for a shot at the WBC title held by Tyson Fury, who is in talks to fight Oleksandr Usyk for the undisputed heavyweight championship. Deontay Wilder, who was ringside Sunday and returns next month, is another possibility for a Ruiz matchup next year.

“If Deontay wins in October, me and him are with the same management and we can make this fight happen,” said Ruiz, ESPN’s No. 5 heavyweight. “Let’s get it on. I’m hungry and I want to be champion again and bring that belt back to Mexico.”

Ruiz (32-2, 22 KOs) scored two knockdowns in Round 2 and showed off his damaging power throughout the 12-round contest. The first knockdown was the product of a blistering right hand that connected on Ortiz’s temple, an equilibrium shot that seemed to impact Ortiz’s balance for the remainder of the fight.

The second knockdown appeared to be a dubious call, with seemingly no clean punch landed.

Ortiz (33-3, 28 KOs) boxed effectively from the outside, utilizing his southpaw jab to control distance. However, every time Ortiz stood and traded, Ruiz usually won the exchanges. The 32-year-old consistently beat Ortiz to the punch, shots that affected the 43-year-old time and again.

The Cuban was on wobbly legs in Round 2 but punched his way out of trouble and punctuated the round with a counter right hand that stunned Ruiz. Ortiz, who weighed 245.5 pounds, also rocked Ruiz toward the end of the opening round with a right hand. If it weren’t for the knockdowns, Ortiz would have pulled out a draw on the scorecards.

“It was a difficult fight,” said Ruiz, who weighed 268¾ pounds. “I was waiting for him to load up and countering him when he did. … Ortiz is a warrior who hits hard. I did a beautiful job boxing him around. I showed more class than I usually do just coming forward.”

Ortiz outboxed Ruiz in Rounds 4 and 5, but the Southern Californian found the target again in Round 7 for another knockdown, the result of another compact right hand.

By the end of the penultimate round, Ortiz’s left eye was badly damaged, swelling exacerbated by a brutal straight right hand that connected in the waning moments of Round 11.

The underdog pushed for the KO in Round 12 and landed a few telling shots, but never seriously threatened Ruiz with his power.

The defeat is Ortiz’s second in four fights, the other a highlight-reel KO at the hands of Wilder in a 2019 rematch for the WBC title. Ortiz was also stopped by Wilder in their 2018 meeting. He entered the fight rated No. 8 at heavyweight by ESPN.

“Everybody that said ‘King Kong’ is old, well, I gave you a war today,” said Oritz, who survived two knockdowns en route to a TKO-6 victory against Charles Martin on New Year’s Day. “I want a rematch. I was keeping my hands up so my vision wasn’t a problem. Do you think I’m done? You saw a warrior tonight.”

Ruiz, meanwhile, is in position for another crack at a heavyweight title. He became the first heavyweight champion of Mexican descent when he TKOd Anthony Joshua in June 2019, one of the biggest upsets in division history.

Ruiz was overweight when he faced Joshua in the rematch six months later and dropped his three titles via decision.

He’s fought just twice since that December 2019 night in Saudi Arabia: a decision win over Chris Arreola last May, and now a victory over Ortiz.