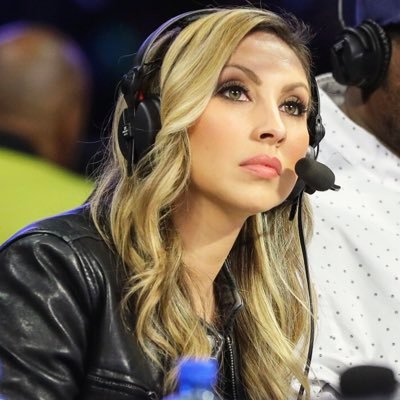 “I’m honored to be a part of this historic card,” says Crystina Poncher. There’s a lot for Poncher to be honored about. This Saturday the longtime Top Rank and ESPN broadcaster will host the highly anticipated undisputed middleweight title fight between Claressa Shields and Savannah Marshall. “These ladies have worked for hard for this moment,” Poncher adds, “and I feel so fortunate to help bring their stories into your homes and call the action on what should be an amazing night of fights in London.” What makes Poncher truly stand out isn’t the fact that she’s a female boxing broadcaster – it’s the fact that the 38 year old mother of two is excellent at what she does.

One longstanding issue of boxing journalism is broadcaster’s and publisher’s occasional need to bring in individuals who frankly aren’t qualified for the job (Frank Sinatra acting as Life Magazine’s photographer for 1971’s Muhammad Ali-Joe Frazier fight is the most glaring example of this). Although Poncher has a strong background as an NFL journalist there is no denying the Californian knows boxing inside and out. In short, Poncher is an expert in her field. That unfortunately is not always guaranteed among sport’s media. “I was a casual fan growing up,” Poncher admits. “My parents would host fight parties for the bigger events, but really I didn’t take a deep interest in the sport myself until after college.”

Few would argue Poncher doesn’t have a deep interest in the fight game now. She is, simply put, ubiquitous among those in the boxing world. That sort of thing doesn’t come easy for anyone, of course. As a wife and mother of two young children, Poncher makes it a point to find a work/life balance. “It’s definitely a juggle,” Poncher admits, “but I feel so fortunate to have the help I do, starting with my amazing husband, niece Jaida and our close family. I couldn’t do it without them. My kids are my motivation so knowing that I’m doing this for them, helps me get through the more challenging times.”

Poncher will have good reason to be motivated on Saturday. There she’ll be at London’s O2 Arena, thousands of miles away from her family, hosting what might well be the biggest fight in the history of women’s boxing. No matter how big the challenge, however, the veteran broadcaster will have family – and supporters – pulling for her back home. Hard work, both in and out of media, has it’s rewards.