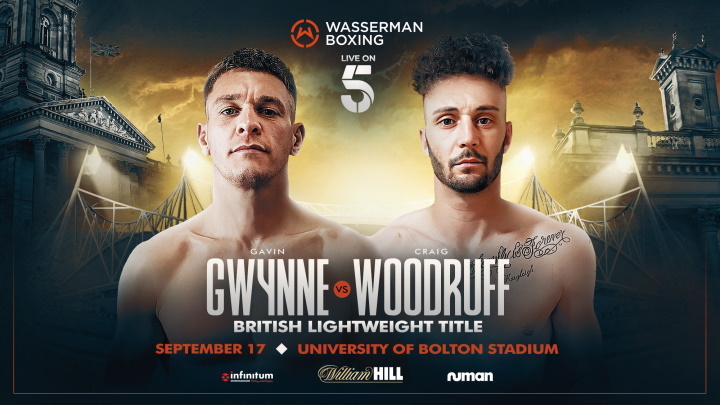 An all-Welsh affair heats up as fighting talk is exchanged ahead of the British Lightweight Title fight at The University of Bolton Stadium on Saturday September 17, live on Channel 5 from 10pm.

The anticipation for fight night continues to build for Newport’s Craig Woodruff (12-6, 4 KOs) as the stakes continue to be raised. Initially, the British Lightweight title was the incentive on offer for the 30-year-old, but now the verbal exchanges have signalled a real battle brewing between the two Welshmen.

The current British Lightweight champion, Gavin Gwynne (15-2, 3 KOs), has discussed the strengths of his own arsenal and how these skills will see him past the test of the challenger. Woodruff sees this an opportune moment to claim the scalp of Gwynne, getting both the British belt as well as verifying his claim as one of the best in the country.

“He clearly has no respect for me,” said Woodruff. “Every interview he’s talking about this defence like I’m not good enough to cause him any problems. I’m the current Celtic champion and the former undefeated Welsh champion so if he wants to overlook me then he’s in for a shock and a very tough night.”

The Newport fighter is in full acknowledgement of Gwynne as a genuine British champion. The respect for what he has achieved is well-documented, but the unearthing of comments made by the champion has now added not only extra spice to this encounter, but extra irons within the fire of the current Celtic king.

“I don’t think Gavin understands that I was out of the ring for four years and I still came back to go from being ranked 86th to being ranked top 10 in Britain,” said Woodruff. “I’ve got respect for what Gavin has achieved. He’s the champion and he deserves to hold those belts, but it’s obvious he’s looking past me and I’m going to show I’m a force to be reckoned with.”

He is certainly excited to display his skills on his continued renaissance as he makes up for lost time after an altercation at a football match left him unable to box. As is the case with most natural fighters, the past builds character but the future is the defining moment, and Woodruff now has the right team around him to make the future a bright one.

“I’ve got the right people next to me now. A dedicated training team with Luke Pearce, Johan Berendjy and Richie Garner who takes up the role as my manager too,” said Woodruff. “I’ve had two losses with them, one to Kieran Gething which was disputed and a close one to Gary Cully who I nearly stopped.”

Gwynne, otherwise known as ‘The Merthyr Mexican’, outlined the competitors he has come up against when detailing that Woodruff has not competed at a similar level. In this back and forth war of attrition, the Newport challenger is more than comfortable with his record and the names of opposition that sit within it.

“My record is littered with great names – Martin Ward, Luke Campbell, Carl Johansen, Mitch Buckland. With the exception of his Gwynne’s last four fights, total up his opponent’s records and you’ll find more losses there than wins. Mine is the opposite.”

“I’ve had to put up with hearing him talk about me being a back-foot fighter, running from him,” continued Woodruff. “His work rate is no concern when it’s backed up by slapping and powder puff shots.”

With a potential British title classic brewing for the live and free-to-air Channel 5 show, this has all the magic to conjure a new name amongst the division. It has been many decades since Newport has been able to boast a British title holder and, whilst being a new name at lightweight is exceptional, it is taking the belt back to his home that drives Woodruff on.

“It has been 40 years since the last man from Newport, David Pearce, won the Lonsdale belt. I’m going to follow in his footsteps and bring that British title back to the city with me,” said Woodruff.

“The moment the board sanctioned me as the mandatory to fight him, I don’t think he realises Robert Smith might as well have told him to hand those belts over there and then. Myself and my team have sacrificed too much for me to walk away without them, wait and see.”