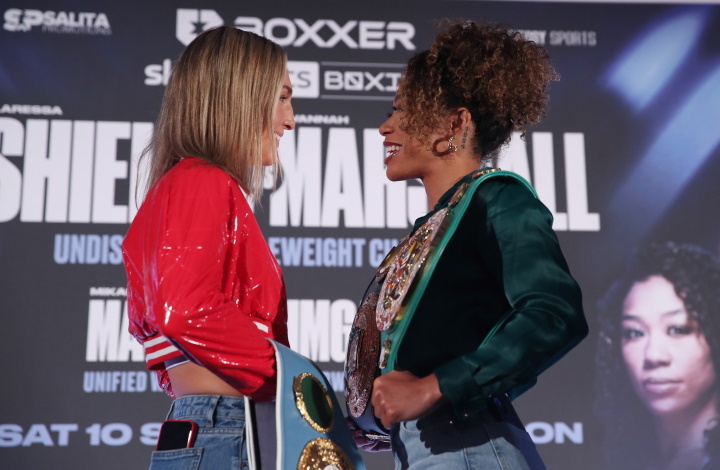 Alycia Baumgardner never doubted that her next fight would be a title unification bout.

The reigning WBC junior lightweight titlist was confidently but cautiously looking to the future throughout fight week leading to her April 16 win over former unified featherweight champ Edith Soledad Matthysse, Next in her sights was a targeted showdown with WBA titleholder Hyun Mi Choi, after which point she planned to face IBF/WBO champ Mikaela Mayer for the undisputed crown.

Plans didn’t quite work out that way, though it’s not to say that it wasn’t a plan that Baumgardner always had in mind.

“I had the choice, that was one thing that I love as a champion,” Baumgardner told BoxingScene.com. “I had the choice as the champion to fight Choi or fight Mikaela. I wanted both, we wanted Choi then Mikaela for all the belts.

“When the Choi fight couldn’t happen, I told my team, ‘Go get me Mikaela. Give me a full camp, and I’ll take the fight.’ That’s what happened and we didn’t have to question it. Here we are.”

At the moment, the two are still scheduled to collide in a three-belt clash as the co-main event of an all-female card on ESPN+ and Sky Sports from The O2 in London. The entire event could potentially get postponed. A concrete decision is expected on Friday, regarding the UK’s mourning protocol with respect to Thursday’s passing of Queen Elizabeth II.

The fight itself comes with great anticipation given their natural born rivalry, which went from zero to one hundred seemingly from the moment Baumgardner (12-1, 7KOs) splashed onto the title scene. The 28-year-old from the greater Detroit area traveled to the home region of then-unbeaten Terri Harper last November, immediately rising to stardom following a sensational fourth-round knockout to win the WBC title last November 13 in Sheffield, England.

The win came eight days after Mayer (17-0, 5KOs) unified the IBF and WBO titles after outfighting Maiva Hamadouche over ten fiercely contested rounds last November 5 in Las Vegas. Mayer immediately called for more unification fights but briefly found herself on the outside looking in when it was believed that a Baumgardner-Choi bout was in play.

Things drastically changed a few weeks after Mayer and Baumgardner posted several title defense wins in April. By that point, the two had exchanged plenty of harsh words to where a fight between them absolutely had to happen. Their teams—Top Rank and manager George Ruiz for Mayer, Matchroom Boxing and Marshall Kaufmann’s King Boxing for Baumgardner—went to work to secure a deal, which was formally announced in May and has remained among the sport’s most anticipated fights ever since.

A near-universal take has the winner emerging as the true champ of the 130-pound division. For Baumgardner, the fight—while the biggest of her career, to date—is a necessary next step along her long-sought journey.

“Undisputed at 130 is still the goal,” vowed Baumgardner. “There was a time when I wanted Choi then Mikaela. So now, the goal is to beat Mikaela first and then Choi, and then move up to 135.”