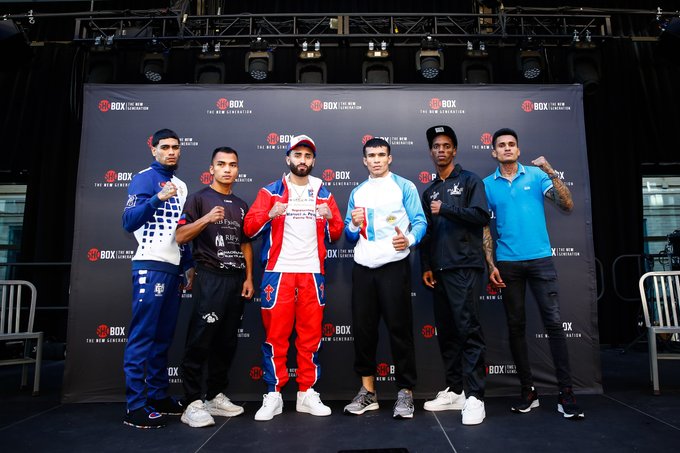 ShoBox: The New Generation returned on Friday night with a three bout card broadcast live from Atlantic City, New Jersey. Thing started off with a scheduled 8 rounder in the welterweight division where the 17-0-1 Janelson Bocachica squared off against the 24-1 Roiman Villa. Bocachica  came out aggressively in the first, while Villa remained patient for the most part.

A series of thunderous punches from Villa at the start of the second put Bocachica on the mat. Bocachica beat the count and Villa went for broke. Bocachica  subsequently lost his mouthpiece on three occasions, which gave him some much needed time to recuperate, but also cost him a point on the cards.

To his credit, Bocachica survived the round. Villa continued to press in the third, however. He also landed thudding shots to head and body. It seemed in the fourth that perhaps all Bocachica would be able to do at that point was survive. Bocachica WAS surviving, though, no matter what kind of effective aggression Villa confronted him with.

Villa kept chopping away at his man in the fifth while Bocachica continued to be game. By the sixth it was clear that each man was lower on energy than he had been earlier in the bout. Both fighters traded leather in the seventh. The eighth was competitive, though it was hard to see Bocachica winning without knocking out or stopping Villa outright.

Villa simply landed the harder shots in the eight and final round, which helped lead him to a unanimous decision win on the judges’ cards.

Next up, the 16-0 Bernard Torres faced the 13-1 Frency Fortunato in a scheduled 10 round featherweight scrap. The considerably taller Fortunato looked better in the first as he flicked out his jab, but Torres began to employ effective aggression in the second. Torres continued to try to pierce Fortunato’s defense in the third. The fourth was somewhat intense, as Fortunato put Torres on the mat – although Torres beat the count.

Frency Fortunato landed well with straight one-two combinations in the fifth, while Torres had his moments. Each man fired heavy leather in the sixth. The fight remained close and exciting in the seventh. By the eighth, the action was starting to slow down a bit. Still, Torres was able to rock his man at the end of the round.

Torres pressed the action in the ninth. The tenth and final round saw Torres throwing punches furiously, while Fortunato threw hard shots of his own. Ultimately, the judges handed the win to Fortunato via split decision.

It was time for the main event, a scheduled junior welterweight ten rounder between the 16-1-2 Joseph Adorno and the 21-0-1 Hugo Alberto Roldan. Things got off to a rousing start with Roldan bulling forward and both men quickly getting down to business. Roldan continued to charge forward in the second, keeping the pace of the fight fast. Adorno, however, was able to score a flash knockdown.

Alberto fought in an intelligently defensive fashion in the third, landing well at times while keeping from being regularly mauled by Roldan. Alberto looked to have rattled his man at the end of the fourth. By the time the fifth rolled around, it was Alberto who was pressing the action. Roldan continued to fight at a high energy pace in the sixth, but it was Alberto who had the edge.

Things were slowing down at bit by the seventh, as each man fought at a deliberate pace. Alberto trusted his jab to carry him through the eighth, though Roldan kept pushing the action. Alberto maintained his defensive strategy in the ninth. The tenth and final round saw Alberto try to outslick his man while Roldan charged foreword as he had for much of the fight.

The judges ruled in favor of Alberto in a unanimous decision verdict.