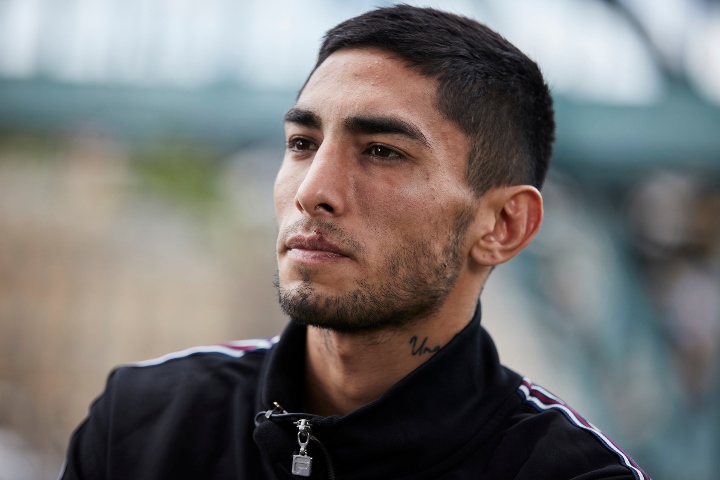 Subriel Matias will have to wait a little longer for his first shot at a major title.

An ordered vacant IBF junior welterweight title fight between Puerto Rico’s Matias and Argentina’s Jeremias Ponce is now on hold.  The bout was targeted for October 15 but is now pushed back, due to Ponce reportedly not being able to secure a visa in time to go through with the fight date.

“I want to report that I will not be fighting on October 15 due to visa issues (with Ponce),” Matias revealed Saturday morning via social media. “I will now continue training; it is out of my hands.”

The vacant title fight was ordered by the IBF on August 24, shortly after lineal champion Josh Taylor (19-0, 13KOs) gave up the title in lieu of proceeding with a mandatory title defense against Ponce (30-0, 20KOs). The recent round of talks marked at least the third time that the two sides were instructed to reach a deal for a sanctioned IBF fight—once each for a potential final eliminator, interim title fight and now for the full title, once Ponce is able to sort out his reported visa issues.

The belief at the time was that a final eliminator would next take place, though both teams were able to reach an agreement amongst each other and with the IBF’s blessing to wait out Taylor’s then-scheduled WBO mandatory with England’s Jack Catterall. Scotland’s Taylor had just fully unified the division at the time, defending his WBA/IBF titles while winning the WBC/WBO belts in a twelve-round unanimous decision over Jose Ramirez in their May 22 undisputed clash between undefeated and unified titlists.

Taylor suffered a training camp injury which pushed back his fight with Catterall from last December 18 to this past February 26, furthering speculation that he would eventually vacate the IBF title. Taylor barely escaped with his unbeaten record and championship reign intact, surviving an eighth-round knockdown to claim a disputed split decision win over Catterall.

The fight outcome drew outrage and demand for an immediate rematch. To Taylor’s credit, he was always on board with facing Catterall for a second time before defending his title against anyone else in the division. That decision has led to him having to relinquish the WBA, WBC and IBF belts, in that order.

Matias has fought just once during that time, scoring a ninth-round stoppage of Petros Ananyan on January 22 in Atlantic City. The win was significant in avenging his lone career defeat when he dropped a ten-round decision in their February 2020 clash in Las Vegas, having since entered a current three-fight win streak.

Ponce has fought and won twice since becoming the IBF number-one contender at junior welterweight, earning a pair of early knockout wins in Hamburg, Germany.

The two were previously instructed to enter talks for an approved interim title fight, which lingered for months. It was believed that a deal was reached but merely waiting on a date, only for the IBF to never receive such paperwork and thus moved forward in ordering a Taylor-Ponce mandatory title fight in July. Those talks went nowhere, with a purse bid scheduled for August 23 but canceled one day prior, fueling speculation that Taylor would vacate the title.