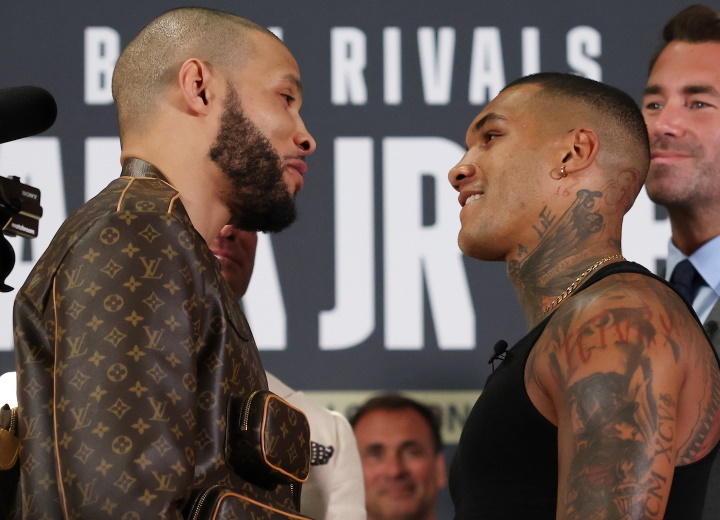 Chris Eubank Jr. promised he only needed to be 60% percent of himself on fight night to defeat Conor Benn, and that apparently also extends to his proclivities in the bedroom.

The longtime 160 and 168-pound contender says he usually refrains from engaging in any copulation during training camp whenever he has an upcoming fight, but he insisted recently that he will not impose as arduous a restriction on himself for his showdown with Benn.

Eubank is set to face countryman Benn, the rising welterweight contender, in their highly anticipated 157-pound catchweight bout Oct. 8 at The O2 Arena in London. The fight has generated headlines because their fathers, rivals Chris Eubank Sr. and Nigel Benn, captured the imagination of the British sporting public with their two fights in 1990 and 1993.

Eubank, 32, said that while top opponents usually require him to abstain from sex for perhaps as long as two months, he will only allot a mere two weeks of celibacy for Benn. The remarks dovetail with what Eubank, 25, said in the press conference for the fight last month that he only needed to be at 60% strength to beat Benn, or otherwise it would be a “public execution.”

“I’m not going to kill myself in this training camp,” Eubank said in a roundtable interview alongside Conor Benn published on the Matchroom Boxing YouTube channel. “Usually I go eight weeks without sex. I abstain for eight weeks. Week by week, the longer you withhold, you build testosterone. I’m going to abstain for two weeks for you. Canelo, Golovkin, they get eight weeks. [Billy Joe] Saunders gets four weeks. Conor Benn gets two.

“Jake Paul gets one week. So you’re not at the bottom of the barrel, but you’re close.”

“I don’t really care,” Benn retorted. “No one asked you about your sex drive and what gets you going…he’s talking rubbish.”

Eubank has repeatedly insisted that he will be at a disadvantage on fight night against Benn, because in addition to having to boil down to 157—a weight that Eubank has said he has never weight at since he was a teenager—Eubank will have to abide by a rehydration clause that is thought to be around 10 pounds.

While Benn may not have to worry about draining himself for the weigh-in, he faces another sort of challenge in trying to ensure that his coveted power holds up against a fighter who operates, at the very least, two weight classes above him.