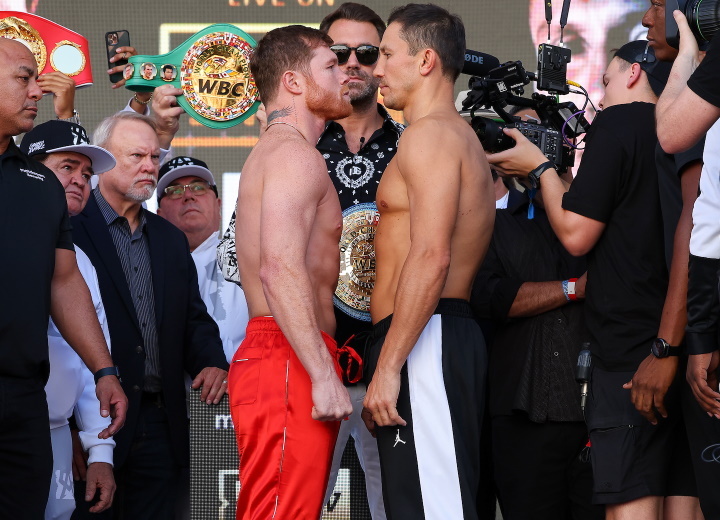 Alvarez’s assertion that their third fight is very personal to him is a perfect case in point, according to Golovkin. If Alvarez wanted to fight him prior to Saturday night, Golovkin contended that the Mexican superstar had all the leverage and easily could’ve signed a contract before earlier this year.

Their third meeting – a 12-round fight for Alvarez’s IBF, WBA, WBC and WBO super middleweight titles at T-Mobile Arena – will take place four years after Alvarez edged Golovkin by majority decision in their 12-round rematch.

“If he wanted this fight back then, if he thought it’s personal, that fight should’ve happened immediately,” Golovkin told a small group or reporters through a translator Wednesday at MGM Grand. “And why was he waiting for four years then?”

Golovkin (42-1-1, 37 KOs) turned 40 five months ago and has fought just four times since his second fight against Alvarez (57-2-2, 39 KOs) in September 2018. The 32-year-old Alvarez has boxed eight times since he won their middleweight championship rematch and became a world champion in two higher weight classes.

Kazakhstan’s Golovkin believes Alvarez was forced, for all intents and purposes, by DAZN to get in the ring with him again.

This will mark the end of Golovkin’s contract with DAZN, which has pressed for this high-profile fight to happen since the streaming service signed Alvarez to a 10-bout contract in October 2018 and Golovkin to a six-fight agreement in March 2019. Golovkin’s contract has been amended, whereas Alvarez actually left DAZN, albeit temporarily, for a Showtime Pay-Per-View fight against Caleb Plant last November 6.

“He has the right to say that it’s personal, but let me tell you what I see,” Golovkin said. “I think he says it because this is [my] last fight with DAZN. There is an agreement with DAZN that there will be no obligations [for me beyond this fight]. He just kind of thinks this situation, thinking about my situation, thinking that a lot of time has passed, four years.

“Now he thinks that he’s in a position to voice those accusations and say that he can knock me out, that he can finish my career. Who is he to start or finish anybody’s career? Maybe he tries to, I don’t know, score some points. But based on age, his position, it’s not up to him.”

For his involvement, Golovkin gets his shot at avenging the only loss of his 16-year professional career. The IBF, IBO and WBA middleweight champion also has been guaranteed a minimum purse of $20 million for this DAZN Pay-Per-View main event ($64.99 for subscribers; $84.99 for non-subscribers).

“The trilogy is a big event,” Golovkin said. “It’s difficult to get a trilogy. It means that I’m in demand, that people want to see my fights. And right now, this is arguably the biggest fight in boxing.”