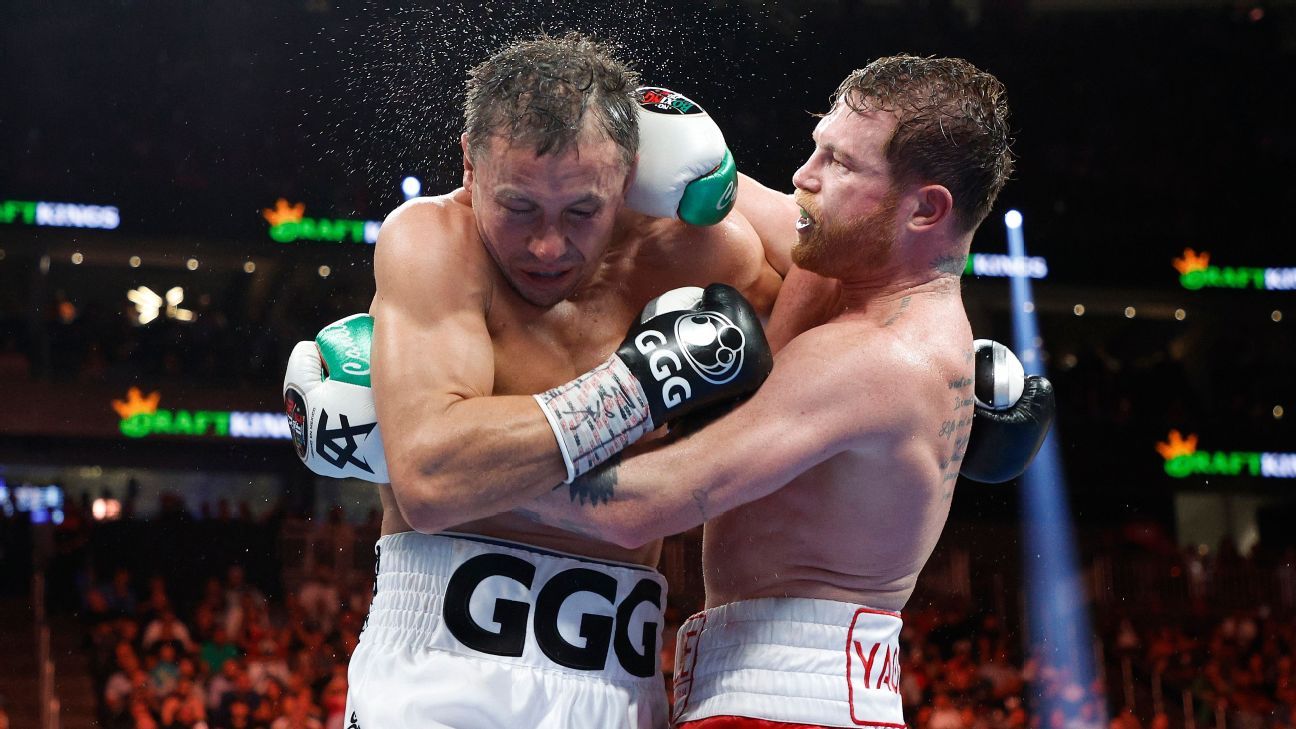 LAS VEGAS — Canelo Alvarez emerged from his rivalry with Gennadiy Golovkin all smiles, the bad blood that brewed over the past five years finally put to rest.

A clear victory over GGG to retain his 168-pound undisputed championship on Saturday at T-Mobile Arena appeared to bring Alvarez solace, if not the pain of an injured left hand he told ESPN is “f—ed up from the Caleb Plant fight.”

That means the powerful left hook was damaged entering his upset defeat to Dmitry Bivol in May, when Alvarez attempted to become a two-time champion at 175 pounds.

He returned to super middleweight for a defense of his four belts against Golovkin, and now, boxing’s top star must decide which division to campaign in. But first, Alvarez (58-2-2, 39 KOs) says he will rest rather than pursue a December stay-busy fight that was discussed earlier this year when he signed a two-fight deal with Eddie Hearn’s Matchroom Boxing.

“I can’t hold a glass,” Alvarez said in the ring after the fight. “[Hand is] really bad. But I’m a warrior.”

Once again, Alvarez, 32, is a promotional and network free agent and will be free to chase the biggest and best fights. His next bout could come against Bivol in a rematch for the light heavyweight title he failed to win in May. Bivol handled Alvarez and the loss ate away at Alvarez during the summer.

Bivol, a tricky boxer with an excellent jab, will first defend his title against Gilberto “Zurdo” Ramirez on Nov. 5 in Abu Dhabi. If Bivol wins as expected, he’s a leading option for Alvarez’s next fight, which will likely take place in May.

“Everybody knows” I want the rematch with Bivol, Alvarez said, adding that he’ll wait to “see what happens” in the Russian’s fight with Zurdo.

Alvarez would be an underdog in a rematch. Besides Bivol’s style, which appears to be a difficult matchup for Alvarez, weight classes exist for a reason. Alvarez’s lone victory at 175 pounds came against a faded version of Sergey Kovalev in November 2019, a brutal 11th-round KO after Alvarez struggled at times earlier in the fight.

Against Bivol, he won three rounds at most and the size difference was certainly a factor. After all, Alvarez won his first title at 154 pounds and has said many times he’s most comfortable at 168.

At super middleweight, where he’s the unquestioned ruler, a couple of attractive options exist, both with PBC fighters. Foremost is a matchup with David Benavidez, a punishing volume-puncher who applies relentless pressure and would enjoy a size — and youth — advantage over Alvarez.

Another option is Jermall Charlo, who hasn’t competed since June 2021 and currently holds a title at 160 pounds. Charlo has expressed a willingness to meet Alvarez at 168.

Whatever path Alvarez chooses, he can move forward with the peace of mind that he’s settled his feud with Golovkin. Now, he can focus on reclaiming the pound-for-pound throne he sat on before the loss to Bivol. The best way to do that, of course, is to score a clear-cut victory over him. The next best way: a defense of his four 168-pound titles against Benavidez.

As always, Alvarez will have his pick of fights as the face of boxing and the career-high paydays he can deliver for his foes.