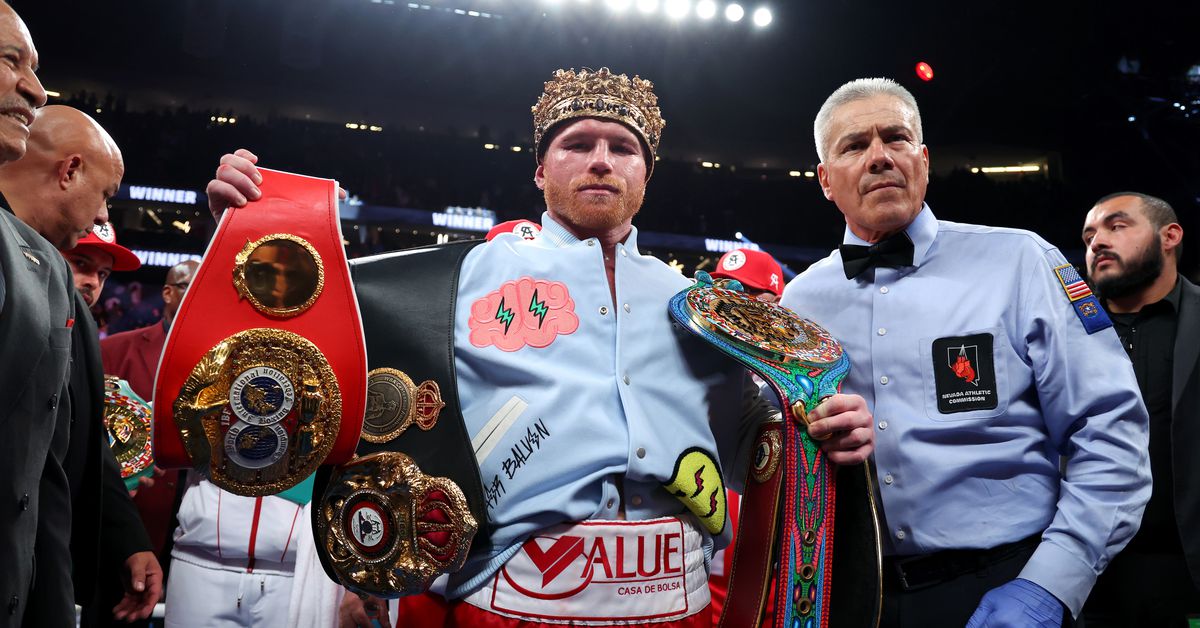 Canelo Alvarez picked up a clear and unquestioned win over Gennadiy Golovkin on Saturday night, and spoke at his post-fight press conference about the victory, his feelings about GGG, the hand (actually wrist) injury he’d mentioned in the ring after the bout, and more.

Notably, he got pretty clearly bothered when asked questions about David Benavidez toward the end of the Q&A session.

On the injury mentioned post-fight

“It hurts everywhere. I had this issue since the Caleb Plant fight, and I was, like, ‘It’s OK, it’s OK, later, later’ — but it started (hurting) bad, bad, bad. I need surgery. (It hurt) really bad (during the fight). It’s not broken, it’s a wrist injury, but it’s not broken.”

[Doctor explaining: “Saul has a TFCC tear, which is a piece of cartilage in the wrist, which affects the body’s ability to mobilize that joint without feeling impingement and sharp pain. … If he has a surgery, depending on what the surgeon decides, probably six to eight to 12 weeks, depending on rehabilitation, if it’s successful.”]

On the scoring of the fight

On what changed in the last four rounds

“I think towards the end of the fight, I obviously started to get a bit fatigued, and that’s because we’ve not been able to work explosively in the gym, but despite all the problems we’ve had, I was really happy with my performance tonight.”

On his satisfaction with a GGG win coming with no controversy

“It’s hugely satisfying to win, despite all the problems I had. Obviously I wanted to get the knockout, but it didn’t come, because he’s a great fighter. That’s why there are 12 rounds in a fight, so you can show who’s the best. I’m really happy with what I’ve done tonight. And with my hand problems, I out-jabbed the best jabber in the world in Gennadiy Golovkin.”

On the switch from rivalry to respect

“I respect him as a fighter. As a person, I don’t know. I consider myself a good person, so I said to him, ‘I’m glad to share the ring with you, we gave the people three good fights.’”

On whether he thinks opponents have found strategies to beat him

“Everyone can see outside of the ring how they can beat me, but nobody — very few people can beat me. It’s very difficult to beat me.”

On whether he’ll miss the rivalry with GGG

“To be honest, I’m really happy I managed to beat one of the best fighters in the world in Gennadiy Golovkin. Perhaps in the future, another fighter will come along I’ll have a similar relationship with. We had three great fights, and I respect him as a fighter.”

On whether he expected more from Golovkin

“He didn’t throw his right hand; maybe he thought I was going to counter-punch him. He only threw the left hand. I just did my job. But it was very difficult to hit him, too, because he was protecting everything.”

On how much time he expects to take off

“I will not completely stop training, but continue lightly training until my hand and body are completely recovered. We’ll take it from there and see how long it takes.”

On where the GGG trilogy ranks in his career

“It’s really important, three of the best fights you’ve seen. It’s important for me, my country, my people. It’s one of the best victories of my career and I’m delighted to continue making history.”

“I hear (Benavidez’s) dad talking a lot of shit, but what has he accomplished? Nothing. (He’s beaten) one single champion, Anthony Dirrell. Please.”

“I don’t know. Anything can happen. … When I say I don’t want to fight Mexicans, it’s because I represent Mexico. That’s why. But I don’t care. I’ll fight anybody. All my entire life — anybody. … I hear (Benavidez’s) dad talking a lot of shit, but what has he accomplished? Nothing. (He’s beaten) one single champion, Anthony Dirrell. Please. … Don’t lack respect when you talk about me. I’ve faced the best out there and never ducked anyone.”

On whether Benavidez and others should fight each other first

Note: Canelo said that he was “a little mad” after this question, and even though it was already going to be the final question, he made clear he was answering no further questions.

“They can do whatever they want. I’m not bothered who they fight. I don’t fucking care.”