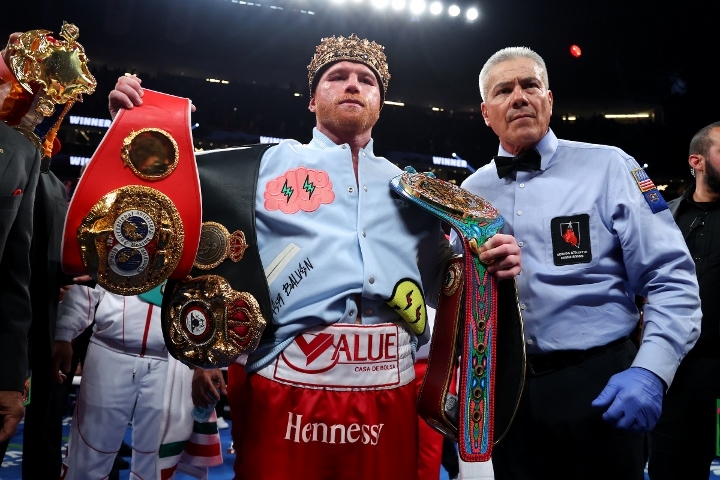 For the better part of five years, the boxing world has been debating Canelo Alvarez and Gennadiy Golovkin. That won’t stop, even after Saturday night, nor will it any time soon. Alvarez and Golovkin provided the sport with its finest three-fight display of high-level boxing this era has seen, and as with all closely contested rivalries over the years, banter pertaining to them won’t stop now. Making the discussion all the more heated is the fact that they also gave us two of the most discussed set of scorecards in boxing history as well.

The third bout on Saturday at the T-Mobile Arena in Las Vegas, the site of all of the contests in the trilogy, certainly gave us high level boxing, but none of the need for debating the rightful victor.

Canelo handily defeated Golovkin in a bout many ringside observers scored in the range of 9-3 and 11-1 in rounds, but was officially scored 116-112 and 115-113 twice. Had David Sutherland and Steve Weisfeld scored one more round each in favor of Golovkin, this fight too would have been a draw.

One has to speculate whether the ringside judges were at all influenced subconsciously by the years of discussion surrounding the scores of the first two bouts between Canelo and GGG. Judges are part of the boxing community too, some more openly involved in its discussion socially than others. For five years, the possibility that Golovkin deserved to win the first bout at the very least has been discussed somewhere on the boxing interwebs daily. Conspiracy theories that Canelo was in the pocket of Nevada judges were abound, and in every interview Golovkin conducted since then, the topic of unfair judging towards him was discussed. Then, in the least competitive fight of the three, the one with the clearest victor, Golovkin was finally given the benefit of the doubt in rounds that he perhaps did not win.

Perhaps it was the boxing universe’s way of balancing things out. At the absolute peak of his powers, it’s more than fair to think that he deserved a legacy-cementing victory over Alvarez in their first bout. But the two fighters didn’t begin at the same starting block. Golovkin was in his prime, at his absolute best, and Alvarez was maybe a year or two away from his apex in 2017. By the time the bell rang this past weekend however, Golovkin was 40 years old, his legs a little unsure at times, his hair thinning, his hands a little more hesitant. Canelo, meanwhile, was 32, fighting at a weight he’d comfortably grown into and ruled the division at.

Golovkin still had his iron chin, occasional flashes of power, but none of the menacing, untethered combination punching that he had half a decade ago, and understandably so. Canelo was simply quicker, sharper and surer of his offensive approach.

Despite boxing being a sport in which fighters are literally attempting to bludgeon one another unconscious, actual personal hatred between combatants is relatively uncommon. In the case of Canelo and GGG however, the combination of unsatisfactory endings and allegations of impropriety stemming from Alvarez’s positive clenbuterol test in 2018 formed a toxic stew. Even during the lead up to this fight, the fighters were accusing one another of being “bad people” and “assh-les.”

But even before the final bell sounded, it was clear that everything would be left in the past on this night. As the fighters met in the center of the ring prior to the 12th round, they touched gloves, which in and of itself isn’t novel—fighters of various degrees of comfort with one another have and will follow custom. However, Canelo followed the glove tap up with a tap on Golovkin’s waist with his left glove, a more personal, tender sign of respect.

When the final bell did ring, the two finally hugged it out. They pressed their foreheads together as wounded but bonding athletes do, and spoke to one another for what seemed like a full minute. Before they separated, Golovkin appeared to kiss Alvarez on the cheek.

“Thank you, my friend. Thank you. We gave the fans three good fights and thank you for everything,” Canelo told Golovkin in the ring. “He’s a really good fighter. He’s strong. He’s a great fighter, and that’s why we’re here. I’m going to keep going forward to keep my legacy growing strong. He’s tough, he’s a tough fighter.

“This is a high-level, this is the best fight in boxing. Everybody knows Canelo. It’s high-level, high performance,” Golovkin said. “Very good quality. This fight was more tactical, like chess. Today, Canelo was better.”

As much as we love authentic hatred between fighters, as it makes the combat itself feel more legitimate, we also want for the fight itself to be a solution to their personal conflict. It makes the sport make sense, and perhaps selfishly sooths any guilt we may have about watching two enemies harm one another for entertainment. It humanizes boxing, but it also makes it humane. The sport provided a platform for two people to earn one another’s respect, and friendship, in the harshest way possible, all for our entertainment.