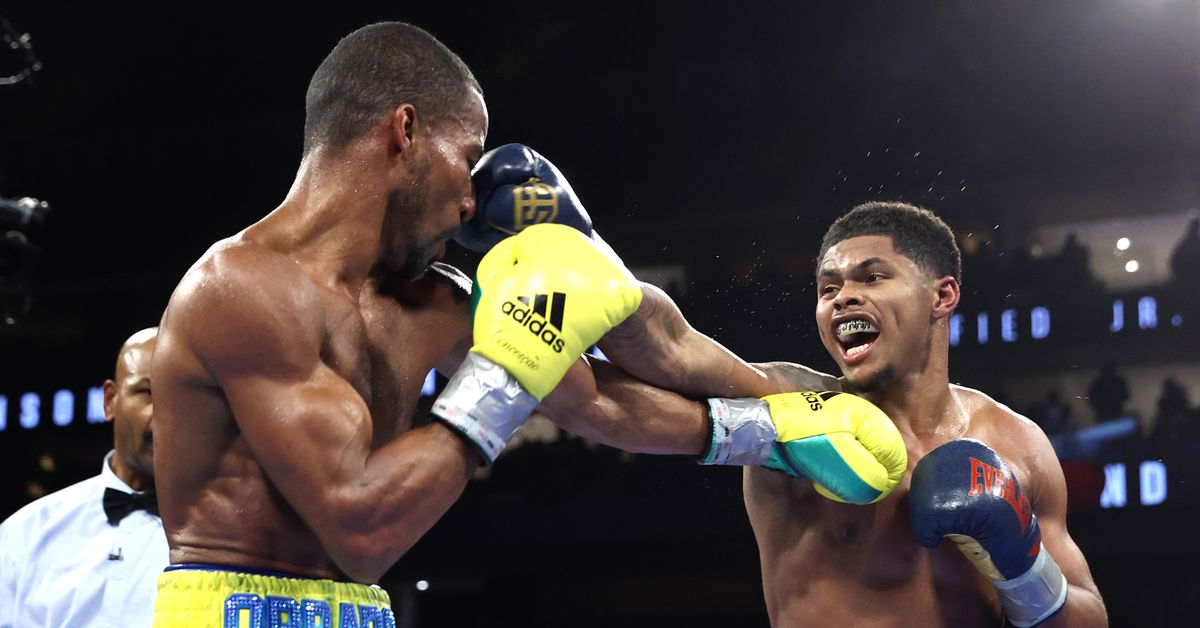 Shakur Stevenson did his normal thing for the most part this evening, winning a clear decision over Robson Conceicao in a fight that lost luster on the scales Friday when Stevenson missed weight.

The end result sends two titles, the WBC and WBO belts at 130 lbs, into official vacancy, as they were only on the line for Conceicao in Newark.

Stevenson (19-0, 9 KO) was at times dominant in this fight, when he got on the front foot and did some damage, even if he never had Conceicao (17-2, 8 KO) in any tremendous danger.

The ringside physician did check on Conceicao between the seventh and eighth rounds, when Stevenson was peaking in the fight, but that seemed to alert Conceicao to the fact that he had to do more, and he did try down the stretch, which saw Stevenson back off a bit, though he would have a great 11th round.

There was plenty of roughhouse sort of stuff in this fight, with Stevenson appearing to stray low — while also doing legitimately good body work — and Conceicao holding frequently, which led to Stevenson’s frustration on the aforementioned hiptosses.

“I had a long week,” Stevenson said. “I killed myself to make weight. All I wanted to do was come in here and perform, and I did everything I could to do that.”

“I’m just a dominant individual. Even with me versus (Conceicao) and the ref, I did everything I could to try to beat him up as much as I can,” he added. “He held me the whole night, but I did everything I could. As soon as I got on the inside, he would grab me. But he’s real awkward and real tough, and he knows how to survive.”

Asked who he might want to target now that he’s moving up to lightweight, Stevenson said, “Everybody at 135 gotta get it. Anybody (can be next).”

After being blatantly led by interviewer Bernardo Osuna, Stevenson did get around to calling out Devin Haney.

The fight did an announced attendance of 10,107, breaking the boxing record for the Prudential Center in Newark.

Another excellent outing from Davis, the 23-year-old blue chipper and Tokyo silver medalist, as he goes to 6-0 (5 KO) with a stoppage of the veteran Tienda (25-6, 18 KO).

This was always about the expectation, Tienda is a 34-year-old vet who’d been on a win streak, but nobody thought he’d be competitive or even win. But the eye test tells you that Davis is the real deal, just an excellent talent who is a mature, skilled fighter for his age, doesn’t need a lot of adjustment or pro polishing, and should be fairly fast-tracked.

I’m not saying he’ll be in a world title fight in his next two or three, but he’s so far beyond this level, they gotta step him up to someone halfway credible in the next fight or two, and he’ll fight for world titles before his 15th fight, surely. As long as all goes according to current trajectory, anyway.

Davis has the same ideas.

“We’re working towards becoming a contender,” he said. “My next fight is gonna put me in that process faster, and next year we’re definitely going to be contending. We’re going to be top 10 next year, for sure.”