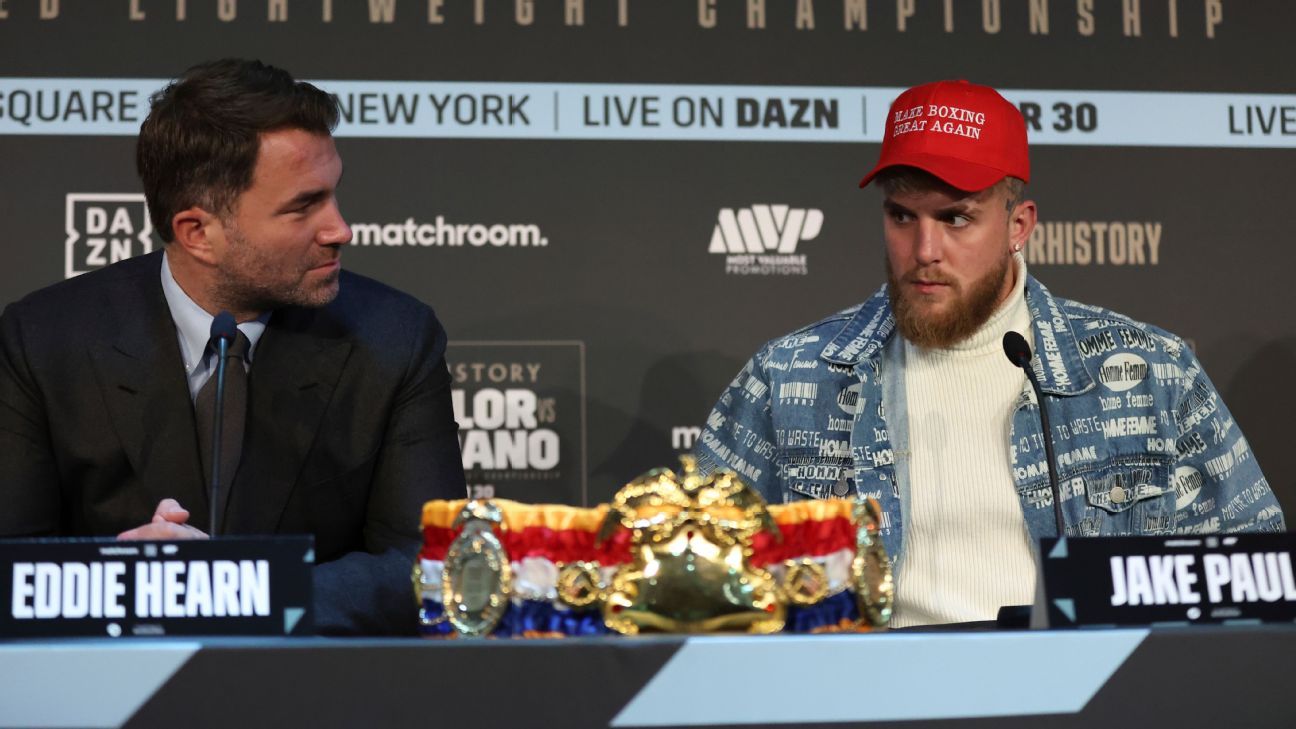 Jake Paul’s foray into boxing may include a fight inside a courtroom.

Matchroom Boxing’s Eddie Hearn, one of the sport’s most influential promoters, filed a lawsuit Friday against Paul alleging defamation after recent Paul accusations that Matchroom paid off a judge in two separate fights this year, per a document obtained Saturday by ESPN.

The suit was filed in U.S. District Court for the Southern District of New York. Matchroom and Hearn attorney Frank Salzano told ESPN that his clients are seeking more than $100 million in damages. TMZ was the first to report news of the lawsuit.

“Both legally and ethically there is a clear line separating opinion from defamatory lies,” Salzano said. “Jake Paul knows that, and he purposely crossed that line when he wrongly accused Matchroom Boxing and Eddie Hearn of fixing fights. Nonetheless he was still given an opportunity to retract his defamatory statements and refused to.”

In an interview last week with IFL TV, Paul said he believed boxing judge Glenn Feldman was getting paid by Matchroom to score bouts for that promotion’s fighters. Feldman was a judge on a bout between Amanda Serrano and Katie Taylor in New York on April 30 and also scored the Oleksandr Usyk vs. Anthony Joshua rematch last month in Saudi Arabia.

Taylor won a split decision, with two judges, including Feldman, ruling in favor of her. Usyk also won a split decision with Feldman the only judge scoring the bout for Joshua. Taylor and Joshua are Matchroom fighters. Serrano is part of Paul’s Most Valuable Promotions and Paul and Hearn co-promoted Taylor vs. Serrano, the first-ever female boxing headliner at Madison Square Garden.

“It’s like a repeated crime here,” Paul told IFL TV. “This type of s—, I’m going to call it out here in boxing because it’s bulls—. Clearly, this guy (Feldman) is getting paid money by Matchroom Boxing.”

Paul’s team was not immediately available for comment Saturday. Paul first made his name as a wildly popular YouTube star and social-media influencer before compiling a 5-0 pro boxing record over the last three years. Last year, Paul began promoting fights, too.

Salzano notes in the complaint against Paul that Hearn has said publicly that he himself scored the Usyk vs. Joshua bout for Usyk and the Taylor vs. Serrano contest was a close, Fight of the Year candidate. The attorney also wrote that Paul admitted in the interview that he was making a “bold statement” with regards to the allegations and that the judges were hired by respective commissions in the Middle East and New York, not Matchroom.

“Such accusations are obviously deeply offensive as well as damaging to [Hearn and Matchroom],” wrote Salzano, a partner in the New York law firm Salzano, Lampert & Wilson, LLP. “They are also patently false.”

Paul’s statements caused what Salzano describes in the complaint as a “media and social media frenzy undoubtedly exacerbated by [Paul’s] enormous social media following.” The complaint reads that a jury trial in the case is “demanded.”

“[Paul’s] defamatory statements were made with malicious intent and have caused financial and reputational harm to [Hearn and Matchroom], which is precisely what [Paul] intended when he made the outlandish accusations,” Salzano wrote.