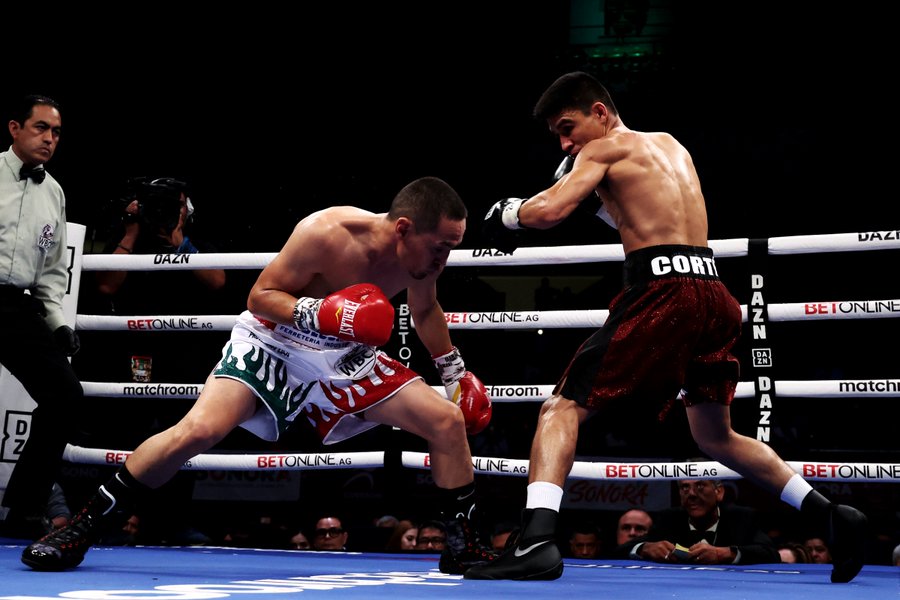 Juan Francisco Estrada had one goal Saturday night in Hermosillo – defeat Argi Cortes, preferably in impressive fashion. Having bested Chocolatito Gonzalez in a sizzling 2021 rematch, the 42-3 Estrada had a likely third fight with the legendary Nicaraguan lined up provided he first beat the 23-2-2 Cortes in their scheduled 12 rounder. As for Cortes, he too had a single goal on Saturday – to stun the boxing world by conquering the popular Estrada.

Neither fighter was afraid to engage in a close first round that saw each man have his moments. Things remained close in the second as it was clear that Cortes had come to win. Defending WBC super flyweight titlist Estrada came out in high energy mode in the third, stinging his man with sharp, effective punching. Cortes however, ended up landing strong shots of his own as the round progressed. Cortes then went on to rock his man hard and repeatedly in the fourth.

The fifth was a blistering affair with each fighter landing on his foe in a fast, furious manner. In the end though, it appeared to be Cortes who got the better of it. The sixth was a thriller. Cortes hit the Estrada repeatedly. Estrada started to bang on his own towards the end of the round, but Cortes rallied before the bell. The seventh, however, saw Estrada drop his man with a body shot. Cortes beat the count, but it was a huge round for Estrada. The eighth once again saw each man hitting hard. Cortes was clearly a bigger challenge to Estrada than he had been expected to be.

Things remained close in the ninth, though it appeared to be Estrada whose punches were having greater impact. The tenth wasn’t as fast paced as some of the previous rounds had been, but Cortes showed he was still in the fight. The fighters continued to chop away at each other in the eleventh. The twelfth and final round saw both fighters leave it all in the ring. The winner of this grueling affair ended up being Estrada by unanimous decision. Cortes, however probably did his career a lot of good Saturday night but virtue of his performance.

Earlier in the evening Erika Cruz defended her WBA featherweight title against Jelena Mrdjenovich, who she beat by decision. Sivenathi Nontshinga also won the IBF flyweight title by decisioning Hector Flores in a brilliant contest.