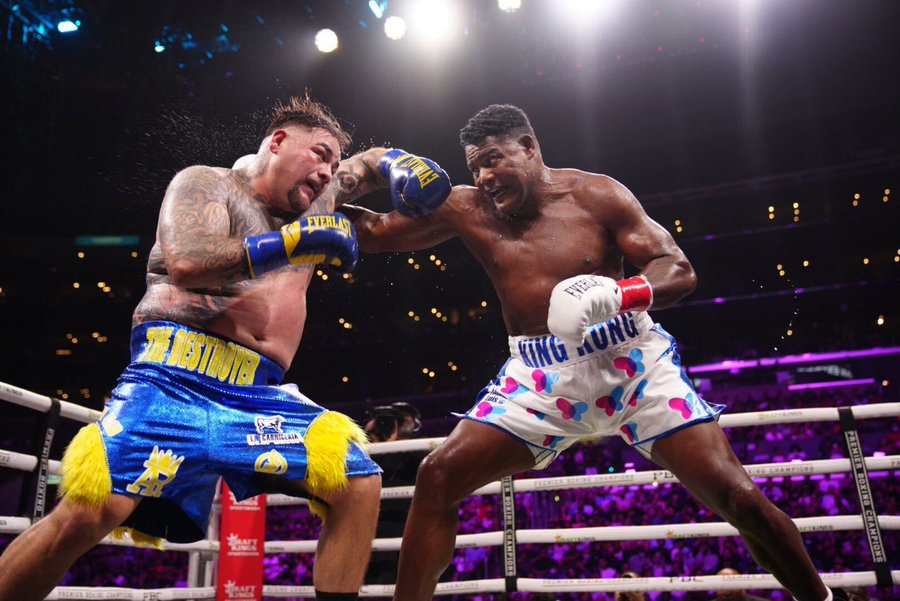 It looked as if Ruiz might have had a slight edge in the opening round. His hand speed simply appeared to outshine anything Ortiz had to offer. Late in the round, however, Ortiz buckled his man’s legs. The second round was, frankly, explosive. Ruiz, lightning fast and with power behind him, dropped Ortiz not once, but twice. By the time the round ended, however, Ortiz was still on his feet and landing powerful blows of his own.

The third was slower than the previous round, but Ortiz was able to put his jab to good use. Ortiz wisely decided to keep his distance in the fourth, largely keeping Ruiz from pouncing on him with the explosive speed he’s noted for. By the fifth, the fight had turned from a slug fest to a boxing match. Ortiz was fluidly flicking his jab while keeping Ruiz at bay – for the most part. Ruiz was still able to have his moments.

There were some boos in the crowd during the sixth round, as Ruiz was tossing bursts at Ortiz, but those bursts were too few and far between. Things turned around in the seventh. Ortiz was dominating what had become a very slow fight, when Ruiz backed him up with a body shot. A few seconds later, Ruiz successfully got in on Ortiz and put him on the mat again. Needless to say, Ortiz got to his feet and the bell rang to end the round moments later.

To his credit, Ortiz was then largely able to successfully jab his way through the eighth. Ruiz proceeded to strike the body hard in the ninth. Still, Ortiz may have used his jab effectively enough to take the round. Ruiz was largely inactive in the tenth. Was he running out of gas? If he was, no one would know it watching the eleventh round, for Ruiz rocked Ortiz again, sending the big man stumbling. Ortiz survived the round, but had simply received too much damage to win the fight, barring a highly unlikely event. Ortiz unloaded his arsenal in the final round, while Ruiz was able to land a few times himself.

Suffice to say, the judges rewarded Ruiz with a UD win.

“You think I’m done?” Ortiz asked rhetorically when asked afterward if he was going to hang up the gloves. “What do the people want?” The crowd cheered loudly, answering the question for him. “He’s a warrior, he hits hard and I thought I did a beautiful job,” said Ruiz. “I just want to thank God so much.” Ruiz was then questioned about his future. “Let’s do it!” he said when asked if he’d fight Deontay Wilder. “Let’s get it on!”

“We can get it on,” Wilder said, after entering the ring and giving praise to his friend Ortiz.