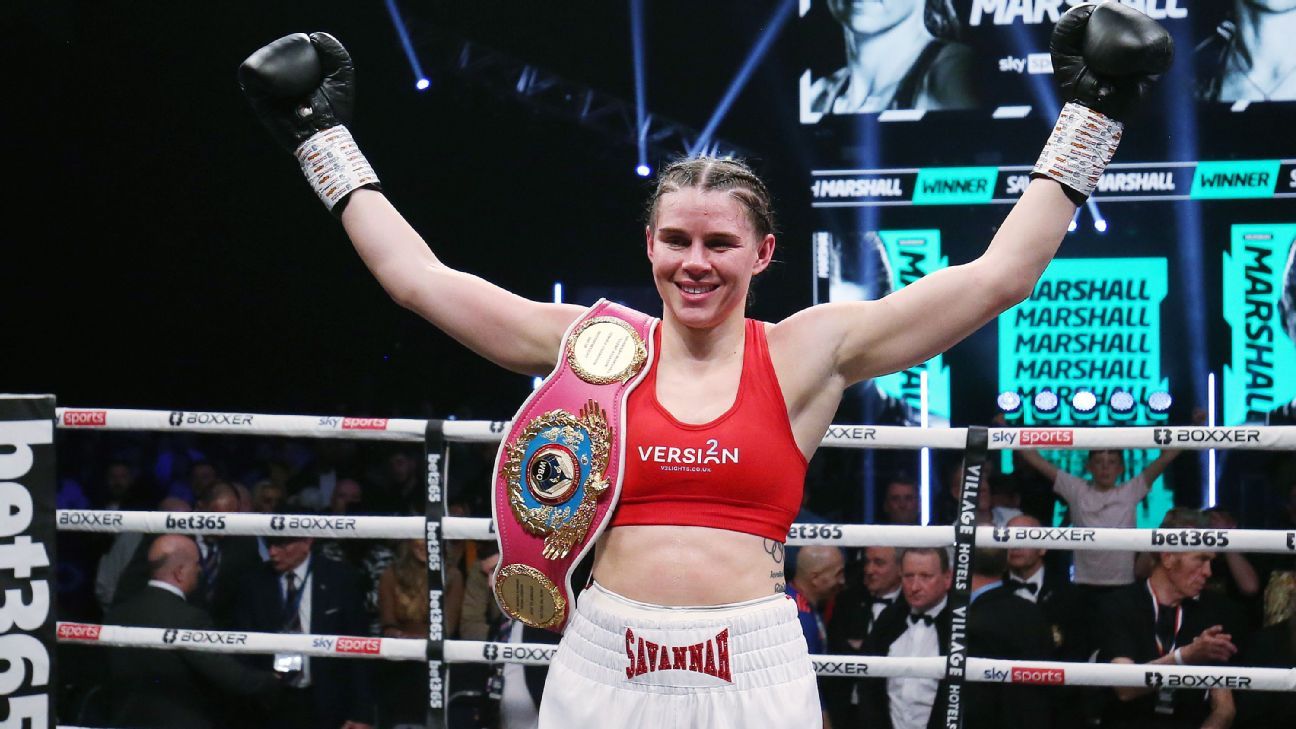 It is being billed as one of the biggest fights ever to be staged in women’s boxing, but how much do you know about Savannah Marshall, who takes on Claressa Shields in a clash to decide the undisputed world middleweight champion at the O2 Arena in London on Saturday?

While two-time Olympic gold medallist and three-weight world champion Shields, 27, from Michigan, is arguably the highest-profile women’s boxer in the world, Marshall (12-0, 10 KOs), 31, is less well known to boxing fans.

Get to know the big-hitting, shy fighter, who has made three defences of her WBO middleweight world title, in her own words.

Marshall was favourite to win gold at London 2012 but fell at the first hurdle as she suffered a defeat in the opening round to Marina Volnova of Kazakhstan. She had a chance at salvation in 2016 when she qualified for the Rio Games, but it wasn’t to be: Marshall suffered another quarterfinal defeat. It meant she almost quit boxing.

Marshall: I was probably the perfect amateur boxer, hands up around the temple, throwing in straight lines, I was nothing like I am now. I won virtually every amateur title and medal there is to win, except the Olympics, including gold at the World Championships in 2012. I’ve got World, European and Commonwealth gold medals, but the Olympics is the one everyone remembers, and I just wasn’t good enough.

I got beat in 2012 and after I did another four-year cycle and not getting a medal at Rio 2016, I was ready to walk away from the sport. I never thought about turning pro. But then someone contacted me and said Floyd Mayweather wants to sign you [to his promotional stable]. I thought I had nothing to lose and that’s the only reason I turned pro — I had nothing else to do.

That four-year cycle was hell for me, and I totally underperformed in tournaments. I had three major operations, I was getting beaten by people who were not in my class. I needed a kick up the arse, and I did well to get a bronze at the 2016 World Championships. That was probably my best performance in two years. I got to the quarters in Rio, I thought I got beat but I didn’t think the scoring was fair. They didn’t even give me one round and I just fell out of love with the sport so I thought that’s me, I’m done with it.

A debut in front of Mayweather

A shock call out of the blue to sign with Floyd Mayweather was enough to convince Marshall to turn pro. What came next would have come as a surprise too as she made her debut on the undercard of one of the biggest fights of the century: Mayweather vs. Conor McGregor.

Marshall: I don’t think he even knew my name, he referred to me as the English girl and I only met him twice and that was it really. He’s got that many people working for him, I met him when I started and then that was it.

I made my debut on the undercard of Mayweather vs.Conor McGregor, The Money Fight [in Las Vegas, 2017], which was amazing. There were about 18,000 at the weigh-in, but there were only about 40 people at my professional debut [on the undercard], but the weigh-in was exciting!

I only had one fight with him and then signed for Hennessy Sports.

Marshall’s career has been on a constant rise since her debut, winning all 12 of her professional bouts, 10 by knockout. That has brought her to this moment: A fight with two-time Olympic champion Shields, who is similarly undefeated at the pro level, and won an astounding 63 of her 64 fights in the amateurs. Her record would have been flawless, had it not been for a 2012 amateur bout against Marshall.

Marshall: There was nothing that really stood out about that fight, it was just in my way towards becoming world [amateur] champion. It was the World Championships and punch for a point, the old scoring system. It was a preliminary bout, my first fight of the tournament, I won and just started thinking ahead to my next fight rather than thinking I’ve just beaten Claressa Shields.

I remember everyone was talking about her before we boxed, and I think she was making quite big moves in America at the time. Later that year she won gold at the Olympics.

Trained by a Fury

Marshall already brings world champion pedigree to this fight, and so does her coach, Peter Fury, uncle of heavyweight world champion Tyson Fury (and also his former trainer.)

Marshall: Peter has been my trainer from the start, and he’s the only man in the sport I trust. I’ve seen the dark side of the sport. If you don’t have people you trust around you, you could easily be had over. I trust Peter and Peter listens to me if ever I have got any issues, any doubts I just go to Peter and there’s a solution. Boxing is 80 to 90% mental, and Peter deals with that.

When I first went to the gym, Tyson was there, and it was when he was massive, making a comeback. I only had one or two sessions with him.

I’ve matured and got older, and I’ve got people in my life that support me and have my back. With pro boxing, it’s not just about the boxing, it’s about profile, tickets and exposure.

Marshall is from Hartlepool, a working-class port town in the north east of England, formerly the heart of a thriving shipbuilding industry, where she started boxing aged 12.

Marshall: I walked into a boxing gym aged 12 out of curiosity when female boxing wasn’t like it is now when you have a lot of women and girls doing it. Back then I was the only girl at my club, and my club [Hartlepool Headland ABC] was called a boys’ club. I wasn’t made to feel welcome at all at the start.

I’m not a football fan but if I had to follow someone it would be Newcastle United because they are the nearest big team to me. There were talks about having this fight in Newcastle at St James’ Park.