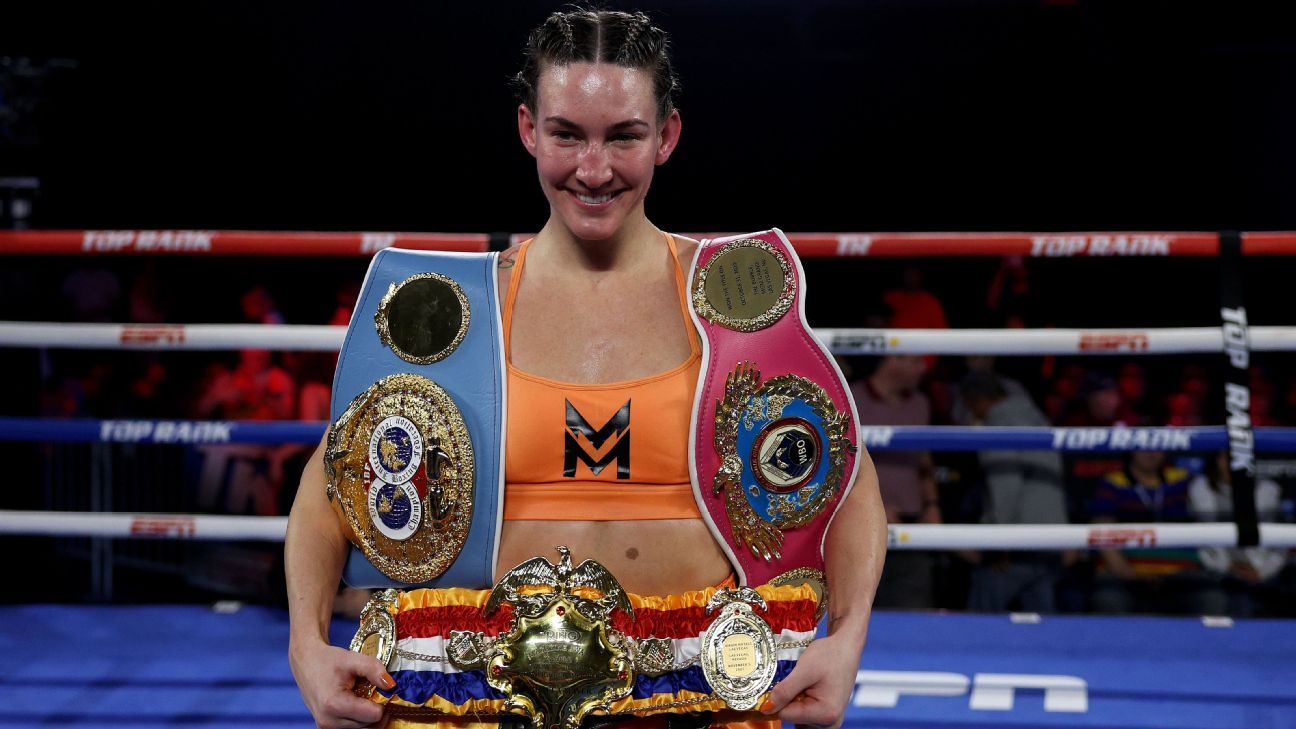 Two big fights. Each could have been a main event on a card of its own.

When Claressa Shields faces Savannah Marshall and Mikaela Mayer fights Alycia Baumgardner on an all-female 10-fight card at the O2 Arena in London on Saturday, it will be another touchstone point for women in boxing.

In a sport where the fights fans want to see between high-level fighters in their primes often seem so hard to book, the women’s side of boxing appears to have figured it out.

Top Rank Boxing is now on ESPN and ESPN+. Subscribe to ESPN+ to get exclusive boxing events, weigh-ins and more.

“It’s saying that women’s boxing can sell,” Shields said. “Women’s boxing does have a large fan base. People do want to see us fight. Women’s boxing is making the best fights. Me versus Savannah Marshall is the Errol Spence Jr. versus Terence Crawford, the Canelo [Alvarez] versus GGG [Gennadiy Golovkin]. This is that fight.

“And then we have Alycia Baumgardner versus Mikaela Mayer. This is a fight, this is a grudge match. This is the Laila Ali versus Ann Wolfe, if that’s what you want to call it. It’s one of the top fights. I think with us all being on the card together, it’s showing that when we all come together, we shine. And women’s boxing can be built up that way.”

This event might be the next step for women’s boxing. On the men’s side, there have been strong double-dips of fights on the same card. Shields said it helped build the fan bases of all of the fighters on those cards.

There is hope Saturday’s card will do the same for the four women titleholders involved, especially the two in the co-main event, who could use a boost in raising their profiles. Here’s a look at Mayer and Baumgardner.

Mikaela Mayer: From liking the Spice Girls to seeking a slice of the UK audience

It began as a business decision. Mayer saw the love fans were giving boxing — specifically women’s boxing — in the United Kingdom and wanted to be part of it. She was committed to growing her fans in her home country, the United States, but this was an opportunity.

Mayer, the WBO and IBF champion, initially was a Twitter villain in the United Kingdom when it looked like she was going to face Great Britain’s Terri Harper, the WBC champ, in a unification bout. But when Harper lost her title to Baumgardner last year, that helped Mayer move beyond the villain role. Mayer also began to put herself out there more in the UK, flying there multiple times to broadcast boxing for Sky Sports and engage with fans.

“In the last couple of years, women’s boxing has hit a level we’ve never seen it hit before,” Mayer said. “And a lot of noise is taking place in the UK, just over the last couple years.”

The 32-year-old’s fascination with the UK started long before her boxing career, though. Like many others who grew up in the 1990s and early 2000s, she was an obsessed fan of the Spice Girls. Seeing the British girl group at The Forum in Los Angeles was the first concert for Mayer, a former metal band bassist.

She knows the words to — and has dances for — almost every Spice Girls song. She would even plan what she wore for the day based on whether she felt more like Posh, Baby, Sporty, Scary or Ginger Spice.

“I still do that,” Mayer said. “It’s just such an easy way to, like, break down and help break through what kind of outfit you’re looking for.”

Mayer still has a dance to “Spice Up Your Life,” one she’s unafraid to break out. It wouldn’t be surprising if there’s something Spice Girls-related leading up to her fight Saturday.

She flew to the UK early from her home in Colorado to get adjusted to the time difference and also because of added media requests. It’s part of a plan set up by her manager, George Ruiz, and Melissa Takimoglu, who helps run Mayer’s publicity in the UK. The strategy is to turn Mayer into a popular name in boxing on two continents.

“This is just me getting in front of a different audience, an audience that already knows my name,” Mayer said. “They already know who I am. I’m just sort of getting to perform for them, giving back to the fans on this side of the pond.

“Ultimately what I want to gain from this is another belt. That’s the most important thing: another belt. Another win and one step closer to becoming undisputed. And I wanna reel in a whole s— ton of solid fans on the way.”

Alycia Baumgardner: ‘I wanted to be great at something’

When Baumgardner was 8 years old and growing up in Fremont, Ohio, wrestling against boys and training at the Fremont Wreckers Boxing Club, she told herself something that has stuck with her. As she worked her way through high school and the start of college, through working as an aide in a nursing home to a professional boxing career, Baumgardner kept a lofty goal in mind.

“I wanted to be great at something,” Baumgardner said. “And I didn’t want to live an average life. I told myself that all the time.”

Baumgardner took a big step toward greatness last November when she beat Harper to capture the WBC belt.

Another early-life goal for Baumgardner was to become her own boss, and she has used boxing as her path toward achieving that. Early in her career, she sold tickets herself to make sure she and her opponent received payment for fights. She didn’t have a high-end promoter or television network broadcasting her fights. Baumgardner ran her own life, made her own decisions.

She fought all over the eastern half of the United States until, after dealing with injuries and delays due to COVID, Baumgardner was booked for her first fight outside of the U.S. — a title shot against Harper in Sheffield, England. In the fourth round, Baumgardner landed a vicious right hand that knocked Harper out while she was still standing. It was one of the knockouts of the year — and turned the 28-year-old Baumgardner into the champion she always envisioned she would become.

“[Harper] was a world champion, OK? She was with Matchroom,” Baumgardner said. “They called me on late notice to fight this girl. I went over there and I beat her across the pond.

“And not only did I beat her, I made a statement.”

Baumgardner thinks her accomplishment has been overlooked in the last year as women’s boxing has grown. She’s shown she has power. She’s shown she can be a champion and defend a title, as she defeated Edith Soledad Matthysse in April. Now Baumgardner is trying to turn herself into a true star, and beating Mayer would potentially push her forward.

“This fight means legacy, for one, but it builds a profile,” Baumgardner said. “It solidifies who Alycia Baumgardner is, right? It tells a story about this girl who has come up in a different route, became world champion and now is unifying the division with Mikaela Mayer, who happens to be, quote-unquote, the best or one of the best.

“It just tells the story of this underdog, an underdog story. That’s how I feel [about] this fight.”

The rest of the card