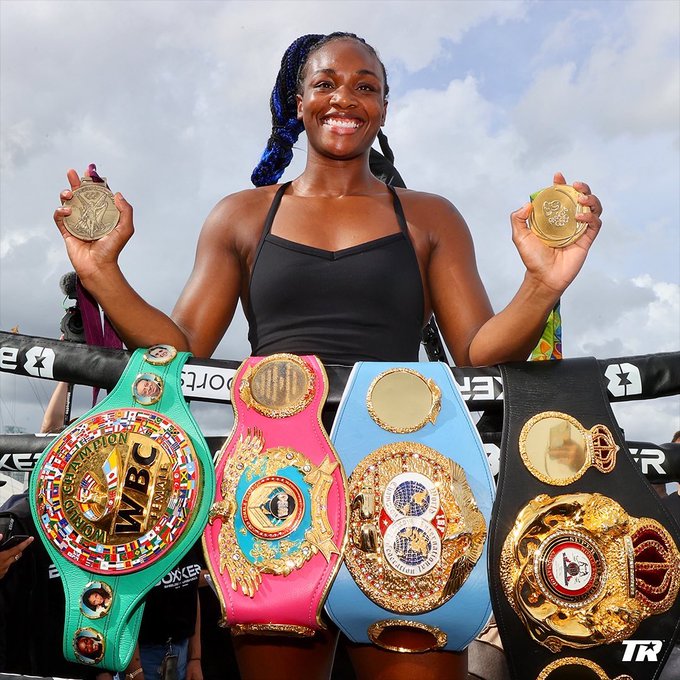 She may well be the greatest of all women fighters. She’s won gold medals, world titles and accolades. Yet Claressa Shields has yet to best Savannah Marshall, even though they did battle in the ring once before, back in 2012. Marshall won that amateur bout, but it’s been Shields who has risen like a comet through the professional ranks of boxing. Now the two women are going to meet again, a full decade after their first and only battle, at London’s O2 Arena. Not that Shields appears bothered by it. In fact, she actually mimicked Marshall in a press conference promoting the bout Thursday. “I don’t hate Savannah Marshall,” Shields said, “but I put in more hard work, and the accomplishments show that.”

While there’s no doubt the 12-0 Shields is the bigger name of the two fighters, Marshall – also 12-0 – holds the WBO middleweight title. The fact that Shields now holds the WBA, WBC and IBF middleweight straps means that the winner of Saturday’s fight will be the undisputed middleweight champion of the world. They might be seen as being evenly matched, but there are big differences between the Shields and Marshall. Yes, they’re from different countries and are of different races, but what really separates these women is their respective fighting styles.

Shields, for her part, is a walking, talking skill set. She simply outsmarts and out points opponents with impressive consistency. Marshall, on the other hand, is a knockout artist. In fact, the last time a Marshall bout went the distance was way back in 2018. For the record, that’s eight fights ago. Marhsall has only gone the distance twice. Shields has only stopped a fight early twice. Again, the stylistic differences between the two undefeated titlists are glaring. It’s also worth noting that Marhsall is almost four inches taller than Shields, while Shields is four years younger than Marshall.

In short, there’s a lot of intrigue leading up to Saturday’s matchup. For the winner may truly prove to be the premier female boxer on the planet. Considering the fact that women’s boxing is making true strides, finally earning the respect and eyeballs it deserves, there’s a lot to be interested in here. With the brilliant Katy Taylor-Amanda Serrano fight having gone down last April in New York, it will be interesting to see how Shields-Marshall plays out this weekend in London. The fact that Shields and Marshall don’t much seem to like each other only adds to the drama.