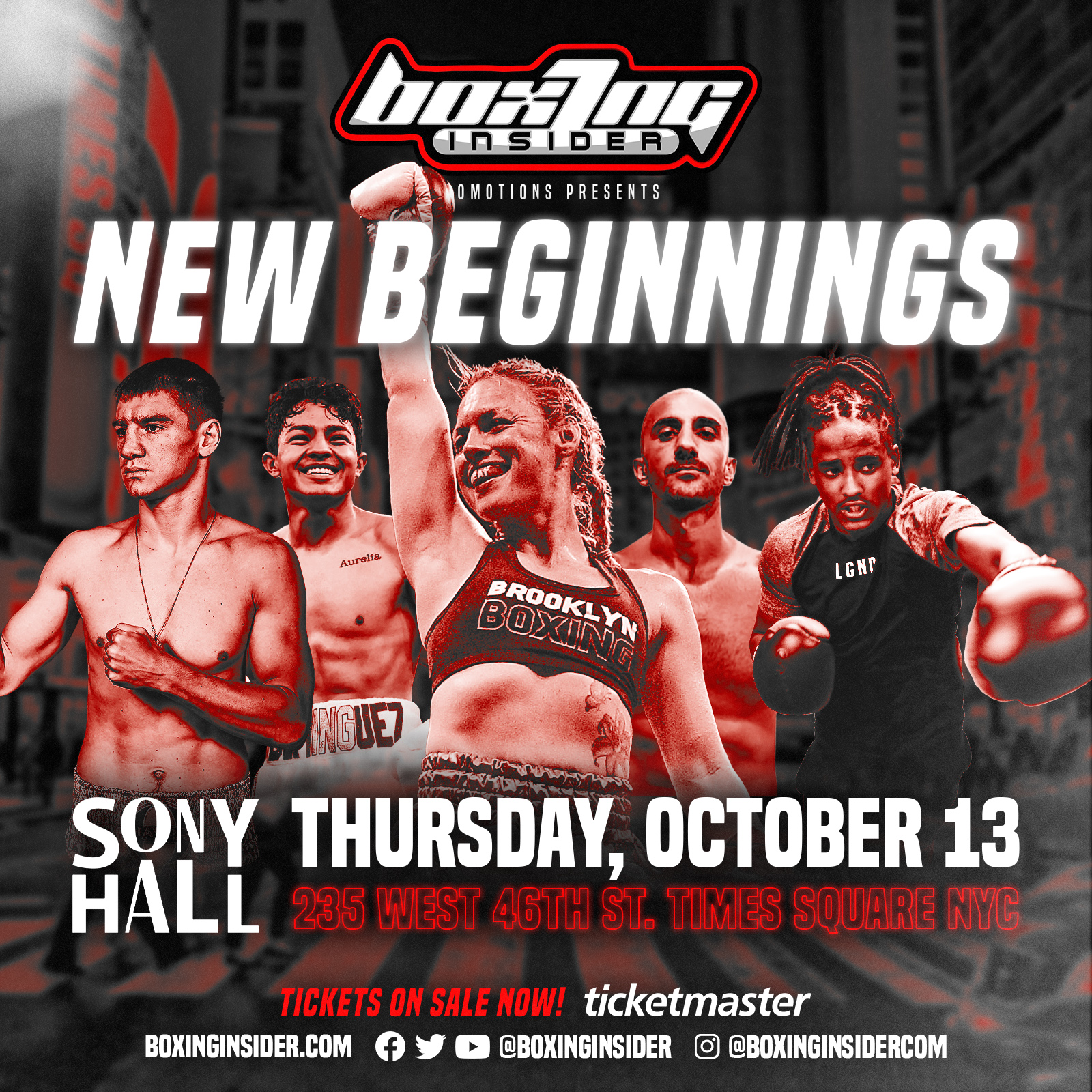 Boxing Insider is diving into the promotional waters, and they are doing it in style at Sony Hall in Times Square.

In this venue, smack dab in the middle of the Broadway theater district, NYC-area fighters will take center stage on Thursday night, October 13.

Boxing Insider’s “New Beginnings” captures the spirit of the “club show” which has long been the lifeblood of the sport. It features local favorites with roots in the community, along with international stars who have transplanted themselves into the Greater New York area.

A former world champion and three other world-ranked competitors will be present and accounted for in the ring.

Much of the attention will surround Brooklyn-born Heather Hardy (22-2, 4 KO’s), who brings “The Heat” back after 17 months of inactivity, as she mounts another run at a world championship. Hardy was the World Boxing Organization Female world featherweight champion until she lost a decision (which was also contested for the World Boxing Council interim featherweight title) to Amanda Serrano, who was last seen lighting up Madison Square Garden in an epic fight against Katie Taylor.

Hardy, ranked #12 in the lightweight division by the Women’s International Boxing Association, will not have a cakewalk in her return. In an eight-round lightweight encounter, she’ll be opposed by unbeaten Chelsey Anderson (6-0, 2 KO’s), who comes across the country from Yorba Linda, CA and brings her #13 WBC world ranking with her.

In a co-feature, Ivan Golub, a native of the Ukraine who currently resides in Brooklyn, will put his USBA welterweight title on the line.

Fans at Sony Hall will also get a chance to see Andy Dominguez (7-0, 5 KO’s) of the Bronx, a dynamic flyweight who currently holds the World Boxing Association Fedecentro title, which he puts on the line. At 24 years of age, he is already 14th in the world in the WBA rankings.

The unpredictable Nadim Salloum (10-1, 3 KO’s), the first pro fighter born and raised in Lebanon, will be seen in a six-round super middleweight bout. Salloum, who now lives in Brooklyn, has a large and vocal following among his countrymen in the New York City area.

Another light heavyweight on the card is Orville Crooks (3-0, 2 KO’s), one of best amateurs New York has produced in recent years. Crooks, who hails from the Bedford-Stuyvesant area of Brooklyn, is both a U.S. Amateur champion and a National Golden Gloves champion. For him, the sky is truly the limit.

“I’m humbled and honored,” says Larry Goldberg, CEO of Boxing Insider. “I’m getting to live every boxing fan’s dream by promoting a show in New York. We’re working hard and we’re going to make it happen.”

“it’s my pleasure to be working with Larry on this, his first venture into promoting,” says recent Hall of Fame inductee Lou DiBella of DiBella Entertainment, who holds promotional rights to Hardy and Golub.  “And especially as it’s at an historic venue like Sony Hall. It’ll be a great night.”

Doors will open at 6 PM, with the first bout slated for 7:30. Tickets for the October 13 event are currently on sale at TicketMaster outlets. Sony Hall is located at 235 W 46th Street in Manhattan.

Stay in touch by visiting www.boxinginsider.com for more fight updates and streaming information.