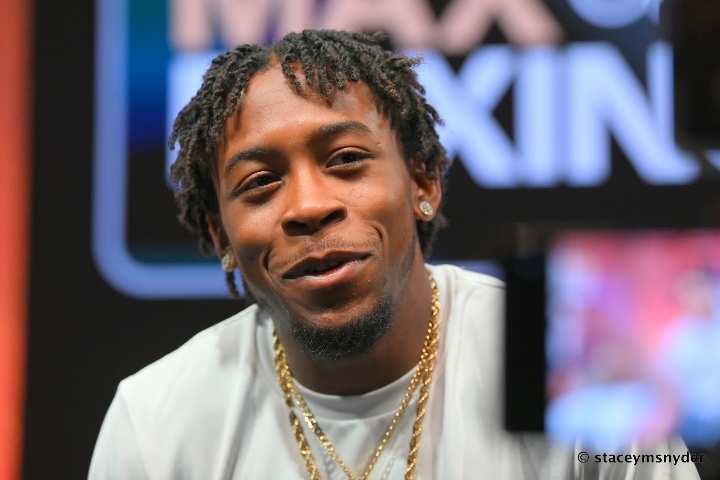 Keyshawn Davis is very much in the infancy stages of his career. But, regardless of having just five pro bouts under his belt, the former Olympic silver medalist is thoroughly enjoying his somewhat meteoric rise.

Currently, the 23-year-old lightweight prospect views himself as more than just an upstart. In fact, as Davis pulls out his tarot cards and attempts to predict the future, he envisions a showdown against Vasiliy Lomachenko as an inevitable one.

“Hell yea,” said Davis when asked during an interview with BoxingScene.com if he sees a matchup between himself and Lomachenko happening. “Before he retires, I already said I wanna fight Lomachenko.”

Although driven to one day face off against the former three-division world titlist, Davis (5-0, 4 KOs) is far from Lomachenko’s mind at the moment. After dusting himself off following his unanimous decision defeat against Teofimo Lopez, Lomachenko (16-2, 11 KOs) has wiped the floor against both Masayoshi Nakatani and Richard Commey.

While he appeared to be on the verge of fighting for a world title, the 34-year-old willingly paused his career to lend a helping hand in his native land of Ukraine. Most recently, however, the former two-time Olympic gold medalist has returned stateside. As recently announced by Top Rank, Lomachenko will officially face off against Jamaine Ortiz in New York’s Hulu Theater in Madison Square Garden on October 29th.

Should Lomachenko hand Ortiz the first defeat of his career, Bob Arum, his longtime promoter, will look to place him in the ring against the winner of the upcoming bout between Devin Haney and George Kambosos Jr.

In spite of what appears to be a jam-packed schedule, Davis is optimistic that he’ll one day be allowed to test his boxing ability against the Ukrainian. Davis, who’s set to return on September 23rd, recently divulged that long before inking a promotional agreement with Arum’s Top Rank, he informed the 90-year-old Hall of Famer that a showdown against Lomachenko is imperative.

“When I first got signed, I told Bob Arum don’t let Lomachenko retire without fighting me. I wanna fight Lomachenko.”