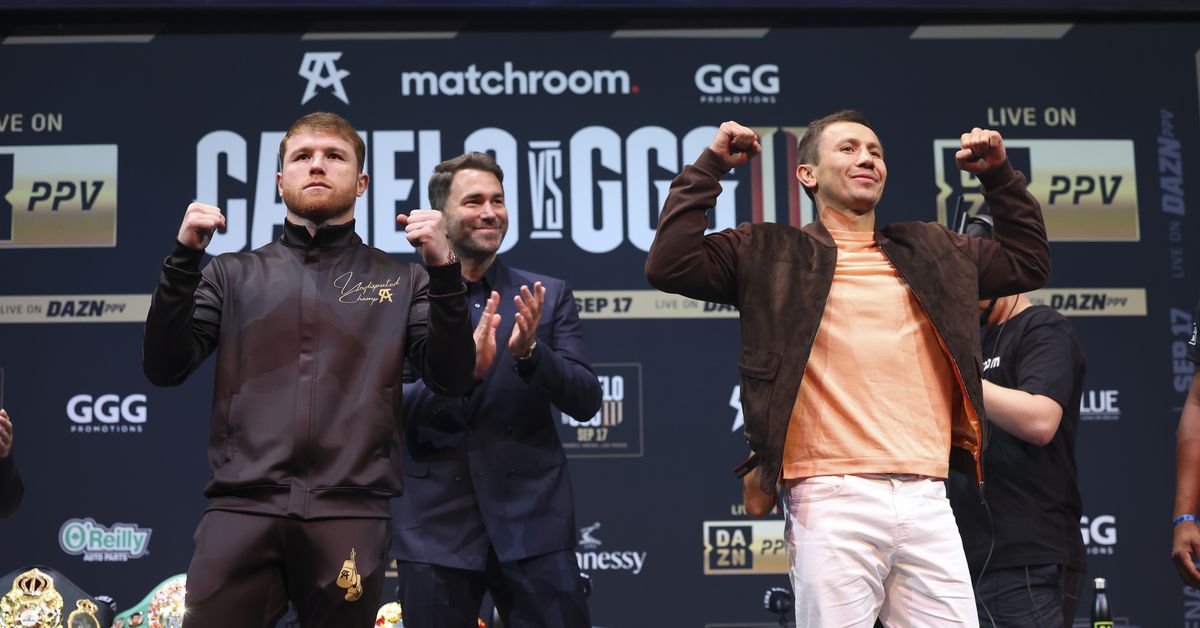 Canelo Alvarez and Gennadiy Golovkin are set to square off for a third time on Saturday, Sept. 17, in what will likely — but not absolutely certainly — be the final time the two great rivals meet in the ring.

Will Canelo (57-2-2, 39 KO) fend off Golovkin (42-1-1, 37 KO) and retain his undisputed super middleweight crown, avoiding a second straight defeat in 2022? Or will the 40-year-old GGG come up with something big and shock a lot of observers, the way Juan Manuel Marquez did in his fourth fight with Manny Pacquiao in 2012?

We’ve got our picks in.

GGG is 40 now, which is not a point in his favor. He’s moving up in weight, which I continue to be baffled about people making a big deal of that, honestly; I’m not saying we should demand fighters move up in weight, but GGG never budging from his “original” pro fighting weight over 16 years is really unusual in the modern era. And I happen to believe he might be better off not losing that additional poundage in the final preparations.

Style-wise, skill-wise, I think they’re still very well-matched. Canelo is hardly infallible and the toughest times he has have always been with fighters who have truly strong boxing bases to their game — Mayweather, Lara, Cotto, GGG, Kovalev, Saunders, Bivol. Those fights span four divisions, 154 to 175, various eras of Canelo’s career, and various stages of those opponents’ careers, and none of the styles are exactly alike.

When you look at where Canelo has had his toughest nights — losses or real competitive fights or debatable/questionably-scored decision wins — that’s the common thread. None of those men were easily out-boxed by Canelo, which is where Canelo builds momentum with his offense. He neutralizes first, then goes for damage. Yes, he stopped Kovalev and Saunders, but both those guys won rounds and gave Canelo issues.

I have some concern about GGG starting slow, especially when you think about it going to the cards, but that might actually be the play here, particularly if Canelo comes out as aggressive as he’s talking up pre-fight.

And I do think we’ll see some abnormal in-ring emotion from Canelo from the jump. Yeah, this is a huge chance for GGG to get a win over a guy he thinks he’s beaten twice and been shafted, but it’s a huge night for Canelo, too. He’s trying to avoid a second straight loss and put a stamp on this rivalry.

I’ve said it a bunch, but even before their spring fights, I wasn’t as down on this matchup in 2022 as a lot of people were. And I believe it’s going to be good entertainment at a high level. The smart money is on Canelo, and that’s where I’m going, too. But can GGG win this? Yes, I believe he can. Canelo UD-12

Once upon a time I wrote about the genius in Golden Boy promoter Oscar De La Hoya telling the entire world that Canelo wasn’t a “real middleweight,” which was the rationale that stood in the way of the first Golovkin fight for a period of time. It appeared to me then that the time afforded Canelo was just enough to let Golovkin get older and let some more wear and tear settle in. Fast forward several years and a couple of meetings later, and I just have a hard time seeing the advantages for Golovkin here.

Yes, many people believe Golovkin deserved the decision in the first fight. But I, myself, found it ironic that in the rematch Team Golovkin spent a lot of energy calling Canelo a runner and daring him to stand with Golovkin. Canelo ended up doing exactly that and it seemed to me that it was Golovkin, who got what he asked for, who was the one more inclined to lay back to box a bit more. Now, we get a third iteration of a closely matched contest but the thing here is that I believe Canelo is still in his prime while I think Golovkin’s age is catching up to him.

Maybe the added weight will benefit Golovkin more than I personally anticipate, but I think Canelo is motivated enough to put on a good performance here as he looks to conclude this trilogy in clear fashion. If Golovkin has a weakness, it’s to the body, and Canelo does pretty well with that sort of thing. I’m going to take Canelo to win a late stoppage this time around. Canelo TKO-11

I’ve never seen Gennadiy Golovkin lose a fight to Canelo Alvarez before. Age and oddsmakers be damned, I won’t sell the old man short this time, either. Golovkin SD-12

I can’t even exaggerate how badly I want to see GGG pull a Marquez on Saturday night. To see him, at age 40, decisively fell the man who waited until Golovkin looked mortal to challenge him and still only managed to quotation-marks-emphasized “beat” him would make my year.

God, I can even picture it. Early-middle of the fifth round, maybe a minute in. Canelo up four-nil with near-finishes in the first and second thanks to another glacial start from Golovkin. Maybe you could give Golovkin the fourth, or maybe you’re deluding yourself because he didn’t lose it as badly as the first few. The announcers, cognizant that they have to keep people interested in a one-sided fight, are hyping up Golovkin’s durability and relentlessly emphasizing how he only needs one good shot to turn things around. The kinds of things you say when aging punchers are desperately outclassed to try and convince those watching that maybe, maybe, the man schooling him will contrive to walk directly in front of the howitzer whose wheels fell off years ago.

The sound of a soft medicine ball dropped onto a hardwood floor from a height of eight or 10 feet. It’s a vintage ‘10s body shot, the kind that turned Matthew Macklin’s guts into an expressionist painting. Right underneath Canelo’s right elbow, and through the visual mishmash of skin, glove, and too-high waistband it’s hard to tell how clean it is. Canelo backsteps, resets, and all at once his torso is made of lead. One knee goes down as the announcers, three syllables into something in the general vein of “nice body shot from GGG,” plumb their lungs for the appropriate volume. Canelo puts everything he has into trying to rise, because toughness has never been among his many faults, but the other knee thuds into the canvas as though it never intends to leave.

Gennadiy Gennadyevich Golovkin, with the infectious smile of a bright-eyed young man left alone at an arcade with a crisp $50 bill, is the undisputed super middleweight champion of the world.

Listen to this week’s podcast including our Canelo vs GGG 3 preview!