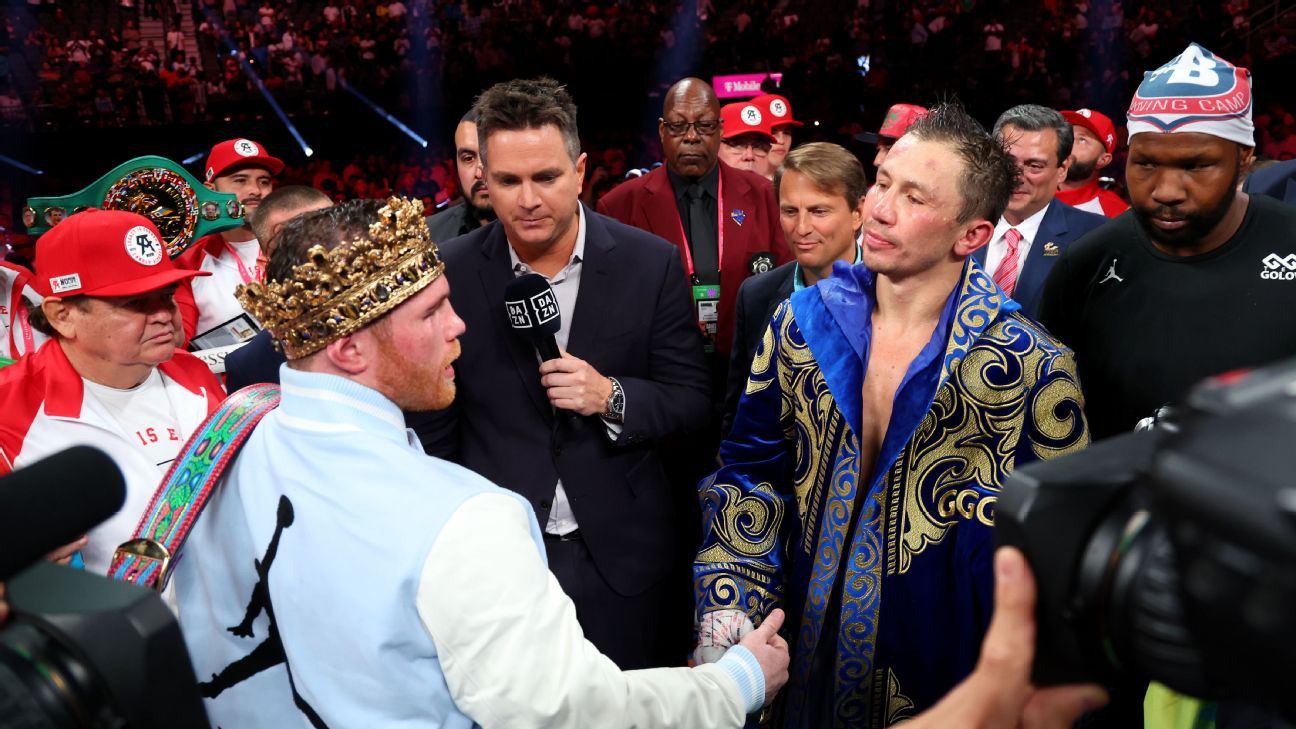 LAS VEGAS — Gennadiy Golovkin was on the verge of being stripped of one of the most endearing parts of his legacy: While Canelo Alvarez was in his prime, nobody fought him tougher than Golovkin, his chief rival.

Then in the ninth round on Saturday night, Golovkin no longer looked like a 40-year-old. He threw punches without reservation, stinging Alvarez and bringing the crowd inside T-Mobile Arena to decibels that drowned out the clapper ringside. Even when the moment eventually subsided, it sparked memories of what made the first two fights between Golovkin and Alvarez so special.

The third fight between the bitter rivals lacked the action and suspense of their predecessors. But even in a unanimous decision loss, Golovkin was able to salvage a key part of how he will be remembered in the sport.

Along with all the championships and an Olympic medal, one of the memorable feats Golovkin accomplished throughout his career was to help establish an iconic rivalry that will go down as one of the best in boxing’s storied history.

“His legacy is solidified,” said Johnathon Banks, Golovkin’s trainer, before the bout. “He’s got nothing else to prove or anything. The man did everything.”

Golovkin entered Saturday’s bout in a no-lose situation. GGG was a significant underdog (plus-380) against Alvarez, who is considered one of the best pound-for-pound fighters in the world. Many believed Golovkin won the first meeting in September 2017, a fight that was declared a split draw and was marred by Adalaide Byrd’s 118-110 scorecard for Alvarez. Alvarez squeaked out a split decision win in 2018, a result that was disputed by many once again, but was not nearly as controversial.

Despite the public opinion leaning heavily in his favor, Golovkin was left chasing a win over his rival that eluded him. After Canelo signed a multifight contract with DAZN, an upstart streaming network looking to make traction in the United States at the time, GGG also inked a deal with the company, which should have streamlined a third fight.

After a win over Steve Rolls in June 2019, Golovkin acknowledged that he, like every other boxing fan, wanted a third fight against Alvarez.

“Everybody knows,” Golovkin said in his postfight interview that night on DAZN. “I’m ready for Canelo. Just bring him. Just ask him. I’m ready. … If you [want a] ‘Big Drama Show,’ tell him.”

To put his patience into perspective, the wait for Canelo-GGG 3 and a matchup between welterweight champions Errol Spence Jr. and Terence Crawford took the same amount of time. Spence and Crawford have finally agreed to meet, according to ESPN’s Mike Coppinger, with a Nov. 19 clash tentatively scheduled.

But eventually, it made too much sense for Alvarez and Golovkin to face each other again. Golovkin was even willing to move up to the 168-pound division for another crack at his rival.

“This is something they want, they’ve been calling for, for several years,” DAZN executive Joe Markowski said during a news conference. “We’re delighted to have finally put it together.”

Look no further than Alvarez’s decision to face Golovkin again to signal the importance of what happened Saturday. Since beating Golovkin, Alvarez has been obsessed with taking fights that add to his legacy and seal his status as one of the sport’s all-time great fighters.

Alvarez became the undisputed super middleweight champion, the first Mexican to hold that distinction in the four-belt era, by beating Caleb Plant in 2021. Alvarez pushed his limits earlier in 2022, when he challenged Dimtry Bivol for a light heavyweight belt, a bold decision that resulted in the second official loss of Alvarez’s career.

The Mexican icon and one of boxing’s top attractions has verbally sparred with Golovkin, especially after the scrutiny Alvarez received following a positive test for performance-enhancing drugs ahead of their second fight.

But the thing Golovkin and Alvarez have in common is their willingness to take risks to push themselves for big rewards. In the prefight buildup, Alvarez didn’t blink about going toe-to-toe with Golovkin, whose power was evident in a ninth-round stoppage of Ryota Murata in April.

But the action that sustained the drama through 24 rounds in two fights was absent for much of the third. Fans who were nostalgic for those bouts were booing at various points as each fighter failed to hurt the other. Both men insisted, while standing in the ring after the fight, that the third fight was a good one — which is easily the minority opinion.

And yet, the crowd stood at the end to salute both fighters. After the 36th round between them ended, they shared words and a long embrace. When Golovkin wrapped up his postfight interview with DAZN, he made it a point to shake Canelo’s hand. The vitriol between them had been eliminated.

Even at his age, Golovkin indicated that he wasn’t planning on stopping anytime soon. He reminded the crowd in Las Vegas that he still has two middleweight belts and is a champion in the 160-pound division, prompting a laugh and a grin from Canelo.

But whenever Golovkin hangs up his gloves for good, an enthralling rivalry fought at the sport’s highest level will be what he will always be remembered for.

As he walked down the tunnel back to his locker room, he grinned and stopped for pictures in his ornate blue-and-gold robe, soaking in the cheers.