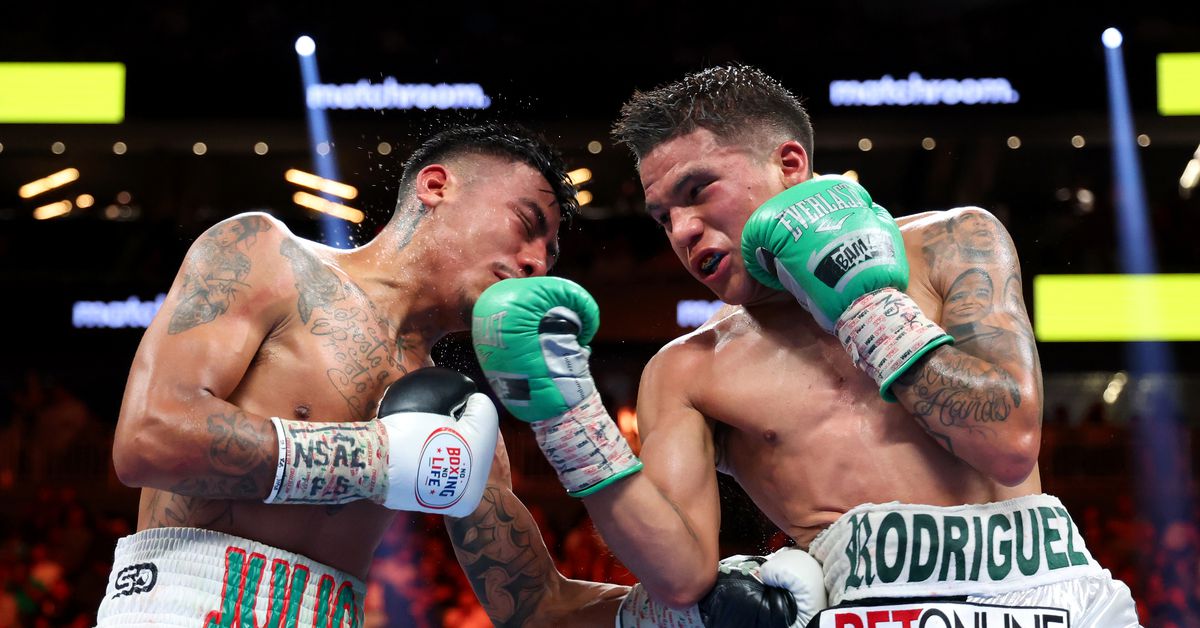 Jesse “Bam” Rodriguez kept his WBC 115 lb title and his Fighter of the Year hopes alive with a hard-fought decision win over Israel Gonzalez, closing out the Canelo vs GGG 3 undercard.

Rodriguez (17-0, 11 KO) didn’t look quite as thrillingly dominant as he did in wins earlier this year over Carlos Cuadras and Srisaket Sor Rungvisai, and there are probably multiple layers to that, but the decision isn’t a controversial one, even if most would agree two of the cards were a bit wide. Given that Rodriguez had a point taken for a low blow in round eight — and could have had another one taken in round 11, but it didn’t happen — the scores mean that one card gave him just one round of the 12, and another one just two.

But when you factor in that, first of all, Gonzalez (28-5-1, 11 KO) is a better and tougher fighter than a lot of people thought come in, and that fighting three times in seven months — which also means three training camps — can fatigue even a young guy like the 22-year-old “Bam,” this isn’t a bad performance or anything. Furthermore, it was a hell of a fight, even if the crowd at the T-Mobile Arena didn’t seem very interested at all, which is no surprise but disappointing to witness all the same.

“It was a tough fight. I didn’t expect that,” Rodriguez admitted. “He was very awkward and very tough. I was trying to get him with body shots and I guess some went a little low, but it wasn’t on purpose. I just didn’t give the performance I wanted, but it’s part of the sport.”

Asked if he still planned to return in December for a fourth fight at the end of the year, Rodriguez said he would discuss it with his team. If he does, the plan is to have him on the Estrada vs Chocolatito 3 undercard on Dec. 3, which would be a two-and-a-half month turnaround from here.

Scores were 100-90 across the board from all three judges, which is the only score you could have. Bad Left Hook also had it 100-90 on two separate cards.

Akhmedov (19-1, 14 KO) didn’t do anything special here, boxed smart, landed some good shots, had Rosado (26-16-1, 15 KO) hurt a few times but never in major trouble, though maybe once or twice Akhmedov could have followed up and just didn’t want to risk it.

Rosado, 36, has gotten some extra career mileage out of Bektemir Melikuziev walking onto a perfectly timed right hand bomb about 15 months ago, but this is now three straight losses for him to Jaime Munguia, Shane Mosley Jr, and Akhmedov. He was flat against Mosley, who is not a fighter that would have likely beaten a younger Rosado; in fact, he’s kind of exactly the sort of guy Rosado has usually beaten. And while he had some fire here and was still tough as nails and hung in, he never came close to winning a round, either.

It’s been a hard-fought, every-penny-earned sort of career for Rosado, who had way more nights in the spotlight than a glance at his W-L record would make you think. It may be time to retire, but there are also fights out there for him at 160 or 168 that would give him decent paydays. Someone like Jason Quigley, maybe. We’ll see what the Philly veteran does.

Akhmedov, 27, has now won three straight since his upset loss to Carlos Gongora. This onew as a bit more serious than the wins over David Zegarra or Paul Valenzuela, in that Rosado is just a better technician and more dangerous on the counter. Akhmedov and his corner respected that, and it wound up a workmanlike win, and even with Rosado clearly past his best days — which were never truly top-level in the first place — this was probably his best win to date.

It’s a decent but in spots somewhat worrying win for “Ammo,” who at 26 is not as young as you might think he is. But the adversity I thought he faced mainly in rounds two through five, when it wasn’t easy for him at all, was answered nicely, and a ninth round knockdown left no real room for doubt that he deserved the win. It wasn’t a huge shot — maybe even a decision call for the referee, but a decision I think the referee got right.

Williams left some concerns about what happens when he really steps up, or faces a bigger puncher than Conway, because Conway made Austin look a little raw and unrefined for portions of the fight. But all in all, Williams did the job; the adversity he did face, he overcame and was the better fighter down the stretch.