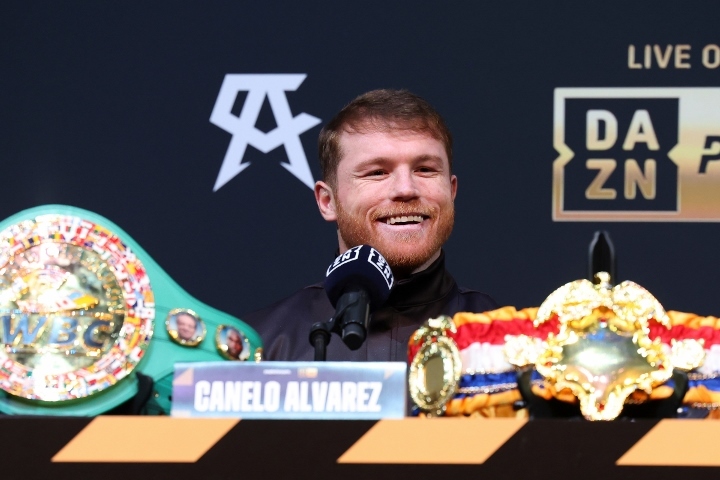 The Mexican legend seemingly took offense during his post-fight press conference to questions about boxing Benavidez next if Gilberto Ramirez upsets Dmitry Bivol on November 5. Alvarez has repeatedly stated that he wants his countryman to beat Bivol, which would cost the four-division champion his own opportunity to avenge his 12-round, unanimous-decision defeat to Bivol on May 7 at T-Mobile Arena.

Alvarez would prefer not to fight Ramirez (44-0, 30 KOs) if the undefeated southpaw beats Bivol (20-0, 11 KOs) because he doesn’t want to face fellow Mexicans. An agitated Alvarez clarified, though, that he is willing to fight Ramirez, Benavidez or anyone else.

“Guys, always I say this – you show that video and put whatever you want,” Alvarez said after he defeated Golovkin by unanimous decision in their third fight Saturday night at T-Mobile Arena. “When I say I don’t wanna fight Mexicans it’s because I represent Mexico. That’s why. But I don’t care. I fight anybody. And I fought all of my entire life anybody. What do you think? That I don’t wanna fight with one Mexican?”

Guadalajara’s Alvarez appeared particularly perturbed when a reporter pointed out that the unbeaten Benavidez was born in the United States and is only part Mexican, as his mother is Ecuadorian. Though Alvarez acknowledged “anything can happen,” he questioned why Benavidez deserves a chance to fight him, regardless of his ethnicity.

“I see his dad talking a lot of sh!t,” Alvarez said. “Look what he’s accomplished – nothing. [He beat] one, single champion, Anthony Dirrell. Please, don’t disrespect [me]. Please, guys.”

The 25-year-old Benavidez (26-0, 23 KOs) is the WBC’s interim super middleweight champion and therefore in position to fight for Alvarez’s WBC belt.

Alvarez (58-2-2, 39 KOs) was able to win the WBC 168-pound crown only because Benavidez was 2¾ pounds overweight for an optional title defense against Alexis Angulo in August 2020. That marked the second time Benavidez was stripped of the same WBC belt without losing a fight.

The WBC first took Benavidez’s title after the Phoenix native tested positive for cocaine in August 2018.

Alvarez, meanwhile, is annoyed at the inference that he isn’t willing to defend his IBF, WBA, WBC and WBO super middleweight titles against Benavidez.

“Don’t lack respect when you talk about me,” Alvarez said. “I’ve faced the best out there. I’ve never ducked anyone.”

Alvarez won’t determine who he will fight next until he completes a lengthy break after having surgery to repair damaged cartilage in his left wrist. He said after defeating Golovkin (42-2-1, 37 KOs) for the second time that surgery should prevent him from returning to the ring until next May at the earliest, but perhaps until next September.