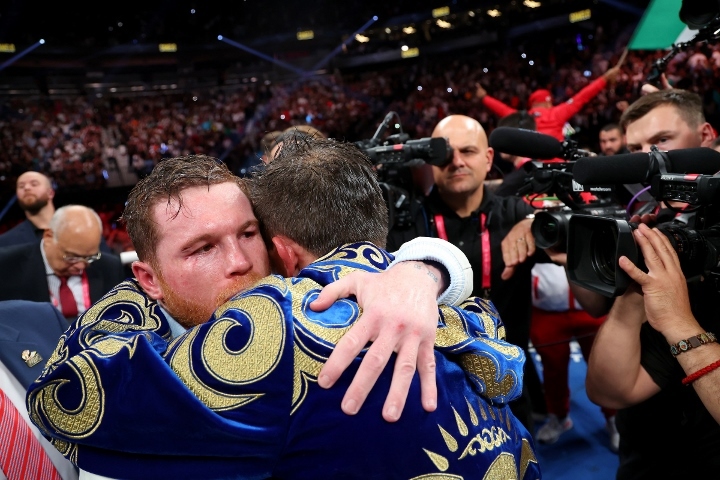 LAS VEGAS – The post-fight embraces between Canelo Alvarez and Gennadiy Golovkin were genuine signs of respect from foes who’ve spent 36 rounds trying to take each other’s heads off over the past five years.

Golovkin even kissed Alvarez on the cheek as they hugged right after the final bell sounded Saturday night at T-Mobile Arena. They graciously continued to praise one another during their post-fight interviews with DAZN’s Chris Mannix moments after Alvarez won their 12-round, 168-pound championship bout by unanimous decision.

Alvarez (58-2-2, 39 KOs) indicated during their post-fight press conference that the professional respect he showed Golovkin (42-2-1, 37 KOs) doesn’t mean he has forgotten all of the negative things Golovkin has said about him since the Mexican superstar twice tested positive for a banned substance, clenbuterol, before their rematch was initially supposed to take place in May 2018. The four-division champion made it clear that he still has doubts about Golovkin’s character outside of the ring.

“I respect him like as a fighter,” Alvarez said. “As a person, I don’t know. But I’m not gonna put [it on] that level because I consider myself a good person. So, I say to him, ‘I’m glad to share the ring with you. And we give the people three good fights.’ So, and I’m glad to share the ring with him and have these three fights [that] is gonna be in the history of boxing.”

The 32-year-old Alvarez always emphasized that their second and third fights were very personal to him because Alvarez constantly called him a cheater for failing the aforementioned performance-enhancing drug tests. Golovkin continually stated that their rivalry wasn’t personal for him, that it was strictly business.

However they feel about each other, Alvarez and Golovkin will forever be connected through one of boxing’s best rivalries of the 21st century.

Alvarez is the only opponent who has beaten Kazakhstan’s Golovkin during the longtime middleweight champion’s 16-year pro career. The Guadalajara native’s victory Saturday night was much more convincing than his 12-round, majority-decision win in their 12-round, 160-pound rematch in September 2018 at T-Mobile Arena.

“To be honest,” Alvarez said, “you know, I’m really happy that I managed to beat one of the best fighters in the world, Genady Golovkin. Perhaps in the future another fighter will come along who I’ll have a similar relationship with. You know, we had three great fights, and I respect him as a fighter.”