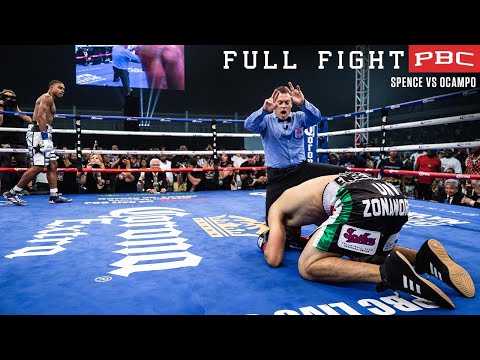 A sellout crowd of more than 12,600 fans packed Ford Center at The Star in Frisco to witness Spence’s first homecoming defense as champion and his first fight in Dallas since 2015. The consensus top-5 pound-for-pound fighter did not disappoint, pounding the body from the opening bell with his trademark body attack and superb ring generalship.

Spence, who was making his second defense as a 147-pound champion, floored Ocampo with a brutal 1-2 body shot combo, the second punch landing flush on the challenger’s side and instantly flooring him as the opening round concluded. Ocampo (22-1, 13 KOs) crippled over in pain while on the canvas, was unable to beat the count and remained on the floor for more than two minutes while Spence celebrated his victory.

“I was a little disappointed. I wanted to give the crowd their money’s worth,” Spence said. “I wanted him to sustain a bit and give him some punishment, but the body shot got him and I dropped him.”

It was the ninth time Spence (24-0, 21 KOs) has floored an opponent with a body shot in his 24 professional fights.

“I knew if I hit him again he would probably drop,” Spence said. “That was my game plan. I’m the body snatcher. If he reacts weirdly, I just keep going to the body and I keep breaking him down.”